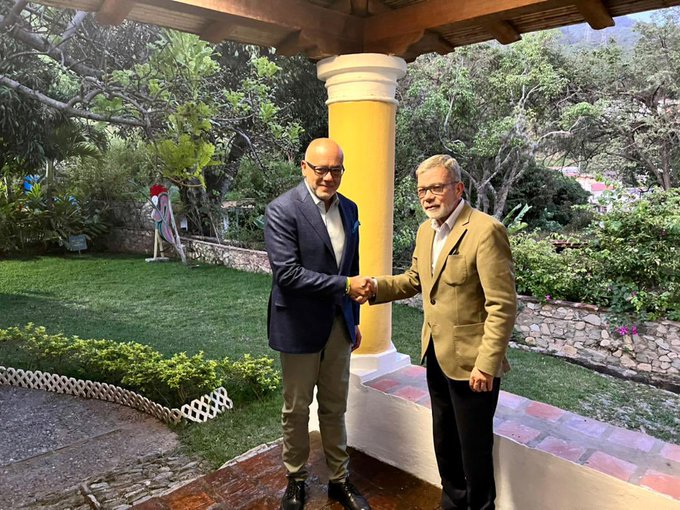 Gerardo Blydeleader of the negotiating delegation of the Unitary Platform, confirmed on the night of this Tuesday, May 17, that the previous talks had begun, but with a formal character, with the delegation of the ruling party to resume the dialogue process in Mexico.

Blyde published a photograph with Jorge Rodríguez, who leads the dialogue delegation for the government of Nicolás Maduro.

Previous conversations to reactivate the negotiation in Mexico

Shortly after, the opponent released a statement that indicates: «The delegation of the Unitary Platform for negotiation between Venezuelans, in accordance with the Memorandum of Understanding signed in Mexico City on August 13, 2021, informs Venezuelans and the international community which has begun formal conversations with our counterpart, in order to achieve its prompt reactivation.

The document goes on to point out that the talks between the parties will include meetings and discussions to agree on the necessary elements to restart the negotiation. This process was suspended after Cape Verde extradited Alex Saab to the United States in October 2021.

“We reiterate our total willingness to urgently build a great political agreement that allows the recovery of Venezuela, through the democratic re-institutionalization of the country, the holding of free, fair and transparent elections and the restoration of fundamental rights for all Venezuelans,” the statement continues.

Finally, the Unitary Platform promised to inform Venezuelans in a timely manner about the progress that takes place in the talks.

Similarly, Jorge Rodríguez reported on the meeting. “In my capacity as representative of the delegation of the Bolivarian government of Venezuela for the dialogue processes, I have held a meeting with Dr. Gerardo Blyde to seek action formulas for the future,” he said.

And he explained that he insisted that Alex Saab is still considered by his delegation as a full member of the table.

«We have insisted on the crucial importance of the development of social issues that are of the main interest of our people. Our brother Alex Saab, kidnapped for 704 days, is a full member of the Venezuelan delegation and is our delegate at the social table that we are discussing. In this sense, Venezuela has demanded, demands and will demand the participation of Alex Saab in any of the work initiatives that are eventually agreed upon”, he stated.

In a work meeting for future plans, in the rescue of the spirit of Mexico pic.twitter.com/YubOmQI8nZ

We have insisted on the crucial importance of the development of social issues that are of the main interest of our people. Our brother Alex Saab, kidnapped for 704 days, is a full member of the Venezuelan delegation and is our delegate…

Environment – ​​One in six premature deaths worldwide is linked to pollution