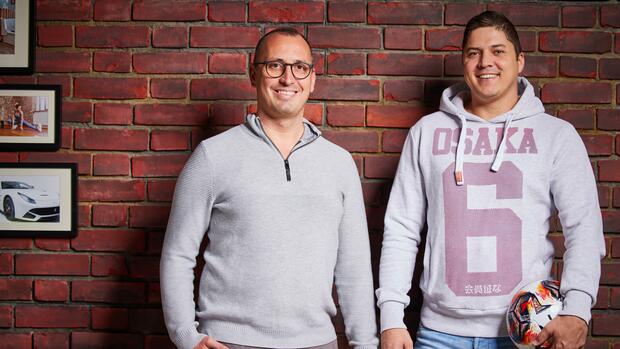 With T1tan, the two founders want to become the market leader for goalkeeper gloves in the medium term.

Düsseldorf For goalkeepers, goalkeeper gloves are the most important tool on the football field. This applies to a district league keeper as well as to a Bundesliga keeper. The glove must be the right size, be comfortable – but close-fitting – and, above all, have a good grip so that the ball does not slip through when caught. Most profit keepers trust the big brands like Adidas or Nike. However, four out of 18 Bundesliga goalkeepers are using T1tan gloves this season.

When Manuel Meier and Matthias Leibitz founded T1tan in 2010, they were still a long way from the Bundesliga. The two 36-year-olds get to know each other during their dual studies and want to start their own company. “At some point we wanted to start with a really good idea and test how to build a company in order to avoid beginners’ mistakes,” explains Meier. You decide to develop and produce goalkeeper gloves. Leibitz is a passionate goalkeeper himself and bought gloves from Russia and Great Britain on eBay as a student and then sold them on.

The big breakthrough did not materialize at first, and business from the home cellar was sluggish for the first few years. Meier becomes sales director of the Swiss Schenker Storen AG and Leibitz continues to work in the marketing of a machine manufacturer. “We did everything ourselves back then, in addition to a full-time job,” Leibitz looks back. “We printed the orders in the evening and got up half an hour earlier in the morning to hand in the parcels.”

The dry spell makes both think of giving up. But in 2014 something unexpected happened: the former world goalkeeper Oliver Kahn, the Titan himself, contacted the two founders and wanted to talk to them. Meier and Leibitz are completely over the moon. A good conversation at a meal together in Munich does not lead to a collaboration, but Meier and Leibitz want to continue.

Patience pays off: This year T1tan expects sales of 3.8 to 4 million euros – despite Corona. If you factor out the three months in which no football was played due to Corona restrictions, the result is even better. Two years ago sales were around two million euros. “The growth is already a great challenge,” says Meier, referring to the rapid rise. T1tan currently employs nine people at its headquarters in Herbolzheim, about 30 kilometers north of Freiburg im Breisgau.

Ex-national goalkeeper René Adler ensured the big breakthrough: In 2017, the keeper, who was still active in the Bundesliga at Mainz 05, noticed T1tan and anonymously ordered a pair of gloves. Adler is enthusiastic about the quality, gets in contact with the founders, invests a low six-figure sum and receives 20 percent of the shares in return. For T1tan this means not only fresh capital, but also advertising in front of an audience of millions, because from now on Adler will wear the gloves on Bundesliga match days.

The ex-national goalkeeper increased the awareness of T1tan considerably.

In the meantime, Adler has increased its stake to 25.1 percent and acts as an advisory partner. T1tan benefits on the one hand from its networking in the industry – with the help of Adler, Bundesliga professionals Florian Müller, Robin Zentner and Stefan Ortega came to T1tan – and on the other hand from its know-how when it comes to goalkeeper gloves. “I have the perspective of a district league goalkeeper and René looks at our developments and productions with 20 years of professional experience,” Leibitz explains the interaction.

This is exactly where T1tan’s business model comes in: professional gloves for the amateur goalkeeper that are significantly cheaper than those of the competition. The top models from Adidas, Nike and Uhlsport often cost around 100 euros, T1tan sells its gloves for 60 euros. Lean structures and sales via our own online shop make this possible. T1tan has no ambitions to offer goalkeeper gloves through intermediaries or in specialist shops.

The two founders are convinced of their products: “I can no longer see any brand on the market that has better goalkeeper gloves than we do,” says Leibitz confidently. From the point of view of Meier and Leibitz, a big advantage over other brands is that T1tan only focuses on goalkeeper gloves, while the competition also has soccer shoes in its range, for example. T1tan was the first provider to bring out a 3D configurator so that customers can design their own goalkeeper glove.

With T1tan, Meier and Leibitz want to become the market leader for goalkeeper gloves in the medium term. Leibitz also has another goal: within the next three years, the founder wants to see a World Cup or European Championship final, in which a goalkeeper plays with T1tan gloves.

In the spring of 2018, T1tan was already in the media focus when Oliver Kahn – four years after eating together – sued T1tan because he saw his rights to the term “Titan” violated. In November 2018, both parties agreed on a settlement and agreed not to disclose it.

More: The “Titan” remains true to himself: Oliver Kahn starts his board job with declarations of war