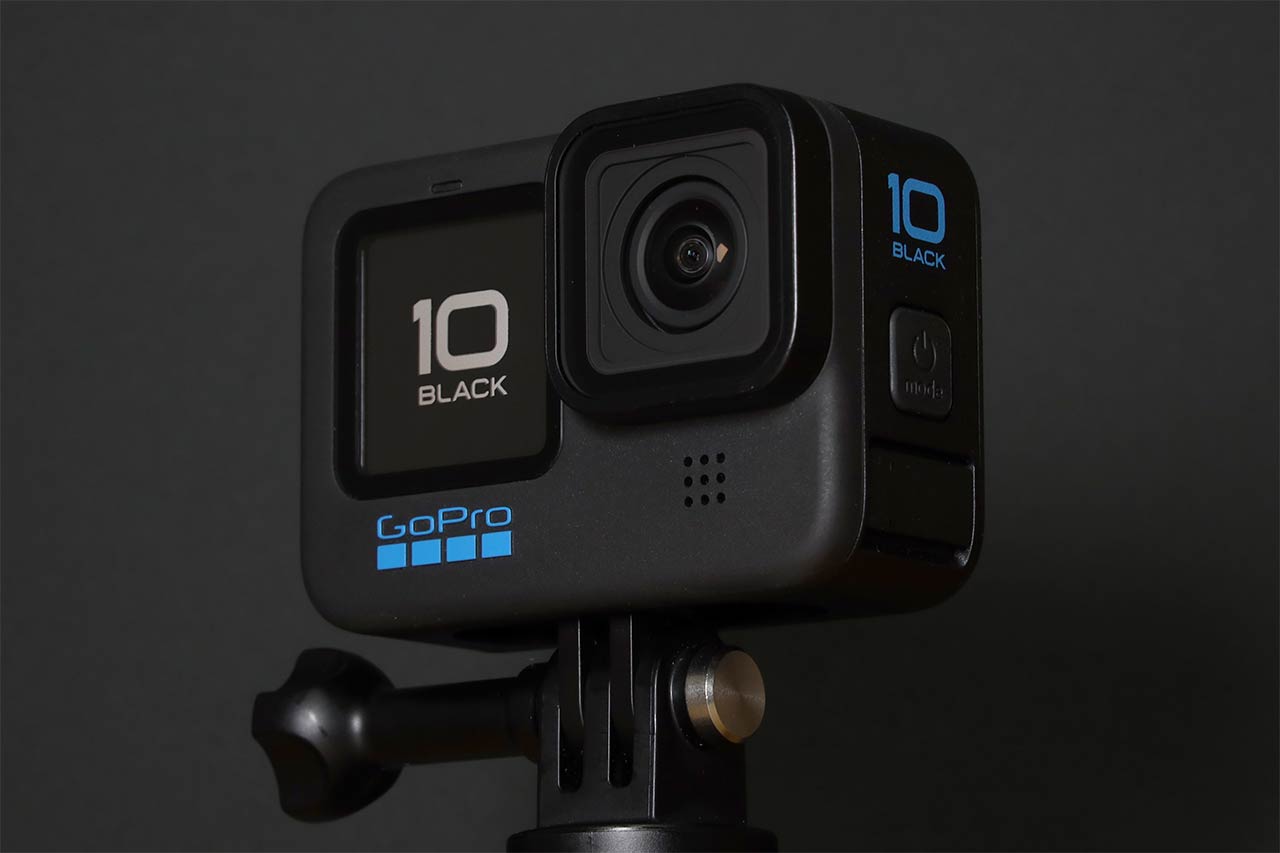 On September 16th, Japan time, GoPro announced a new model of action cam “GoPro HERO10 Black” (hereinafter, HERO10). Now available on GoPro.com. The price on GoPro.com is 64,000 yen (tax included), and you can purchase it for a “GoPro subscription” subscriber with an annual fee of 6000 yen, or for 54,000 yen (tax included) if you subscribe at the same time as the purchase.

By the way, the GoPro product lineup looks like HERO10 has been added, and in addition to HERO9 one generation ago, GoPro HERO8 Black (hereinafter, HERO8) and GoPro MAX will also be sold together.

That’s why this time, I got the opportunity to try HERO10 in advance, so I will introduce it together with the actual machine.

Immediately, but I’m still worried about “Last year’s GoPro HERO9 BlackWhat is the difference from (Hereafter, HERO9)? ” The biggest evolution of HERO10 is that the “GP1” processor adopted from GoPro HERO6 Black has been renewed to “GP2”.

As a result, the shooting performance has been greatly improved, and it supports up to 5.3K / 60 frames for movie shooting, up to 120 frames for 4K, and up to 240 frames for 2.7K (23MP for still image shooting). In addition, it is said that noise reduction in dark places has been realized by improving high sensitivity performance. In addition, the camera shake correction function HyperSmooth has evolved to “HyperSmooth 4.0”, and it is said that blur correction has been strengthened than before. GP2 is also used to improve operability, such as improving the response of touch operations and improving the frame rate of the front display.

The following video compares the effectiveness of HyperSmooth on HERO10 and HERO9. In the first place, the blur correction is quite effective in HyperSmooth 3.0, but HERO10 seems to have less blur. But to be honest, it’s a dramatic difference …

Next, the video below is a comparison of shooting in the dark. This is a level where you can clearly see the difference, and you can see that HERO10 has less noise than HERO9. However, when the movement became intense, I had a severe impression even with HERO10. Also, the ISO sensitivity can be set up to 6400, but be aware that 3200 and above will be quite noisy.

I also tried shooting at 5.3K / 60 frames, but the higher the resolution, the larger the file size (about 200MB in 15 seconds with 5.3K 60 frames), so instead of shooting at 5.3K, everything is used. It seems good to change the setting according to.

Other than that, there are no major changes from HERO9 in terms of functionality, and impact resistance and 10m water resistance are the same as before. What you could do with HERO9, such as using GoPro as a webcam or live streaming only with your smartphone and GoPro, can basically be done with HERO10 as well.

The appearance is almost unchanged. HERO9 accessories can be used as they are

On the other hand, when it comes to appearance, many of you may have noticed it, but the appearance is almost the same.

There is no difference in that it has a 2.27-inch touch-compatible display on the back and a 1.4-inch color LCD on the lens side, and the body size is exactly the same as HERO9 (W71.0mm x H55.0mm x D33.6mm). The power button on the left side, the shooting button on the top, and the retractable mount finger on the bottom are the same as before. The only changes are that it weighs 153g, which is 5g lighter than HERO9, and that the logo color has changed to blue.

Therefore, the accessories are the same as those for HERO9. The current HERO9 also includes the “Media Modular” that allows you to add a directional microphone, 3.5mm microphone terminal, mini HDMI port, etc., and the “Max Lens Modular” that keeps the camera horizontal even if you rotate the camera with powerful image stabilization. You can use the one for you as it is.

As I felt when I reviewed HERO9, the smartphone app “Quik” that can be used in conjunction with GoPro is convenient. From the app, you can control GoPro including changing settings, check videos / photos, live stream in 1080p quality, and even have an automatic video editing function.

The advantage is that you can operate GoPro without touching the camera, but the automatic video editing function is excellent. Simply select multiple videos and the app will automatically extract nice scenes and add music and motion to make one video. If you transfer the completed video to your smartphone, you can easily share it on SNS.

So, I installed HERO10 on the dashboard of the car, shot it with TimeWarp, and tried using the automatic editing function. Does the editing itself take just a minute or two? You can make more, but it’s nice to be able to easily make videos of a certain quality.

A classic action cam that is easy to use

HERO10 is the most high-spec model of the current GoPro. The appearance is not much different from the previous model, but the contents have definitely evolved. Also, since it is a product that has been evolving for a long time, it is easy to use, including apps.

If you want to keep costs down even a little, you may choose HERO8 and HERO9, but the price difference with HERO9 is 5200 yen (for GoPro subscription subscribers), so if you are worried, choose HERO10. You won’t regret it. If you are a HERO9 user, you may be able to share accessories, so you may want to buy more and make a two-unit system.