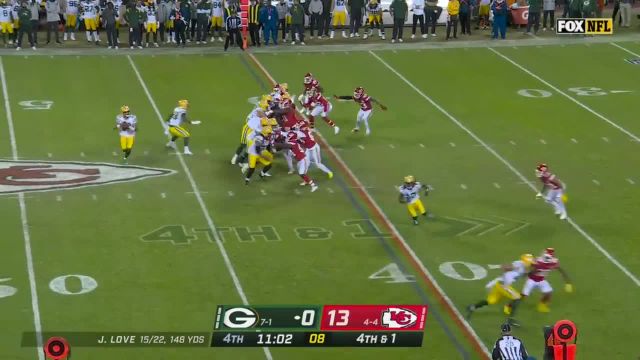 Green Bay lost to the Kansas City Chiefs (13-7), in a remake of the first Super Bowl (played in 1967). The Packers were led by Jordan Love, the replacement quarterback for Aaron Rodgers (tested positive for Covid-19). For his first tenure in the NFL, Love delivered an honorable performance (190 yards, one touchdown). Patrick Mahomes, the Kansas City QB, was far from his usual standards, with 166 yards and a TD. Green Bay suffered its second loss of the season, after seven straight wins.

The LA Rams were victims of the Tennessee Titans (28-16). The latter did not suffer from the absence of their star runner Derrick Henry (broken foot). Their defense undermined Matthew Stafford, the Californian quarterback, sacked five times (including three by Jeffery Simmons) and author of two interceptions (which each resulted in a touchdown). Tennessee led 21-3 at the break, with three TD’s scored in the second quarter. Legend Adrian Peterson, replacing Henry, then scored a fourth touchdown for the Titans.

Arizona wins without Murray or Hopkins

Without Kyler Murray (ankle) or DeAndre Hopkins (tendon), the Arizona Cardinals dominated the San Francisco 49ers (31-17). Runner James Conner scored three TD’s. With eight wins and one loss, the “Cards” have the best record in the NFL. Finally the Los Angeles Chargers have returned to victory, after a month of drought, against the Philadelphia Eagles (27-24). They won at the last second, on a field goal from Dustin Hopkins.

China seeks to redefine its strategy against infections

Who is Chirey, the new Chinese car brand that will arrive in Mexico and what is its SUV offer