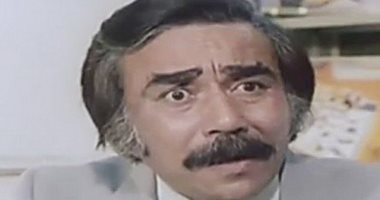 He may be one of the unknown names, but his face, roles and characters are unforgettable, the artist Fouad Ahmed, born January 27, 1936, who was famous for playing the roles of the villain in many films and dramas.

Due to his extreme devotion to his work, he lost his sight due to a mistake in the make-up process during his performance of the character “Haman” in the series “Muhammad is the Messenger of God”.

His son recounted the details of the incident, saying: “Make-up at the time was not the same as I am now, and my father relied on oil colors and Duco car paint to paint his face and body so that his shape was in line with what he presented of the historical personality.”

He added: He used gasoline and diesel to remove make-up from his body, and he used to bathe with them, and repeating the process on a daily basis led to his being affected in a healthy way, but thank God he recovered in his last days.

His last work was the series “The Republic of Zefta”, in which he participated while he was completely blind. Years before his death, Fouad Ahmed moved away from acting, and died on August 15, 2010 at the age of 74.

Lawyers for the American basketball star imprisoned in Russia: We will appeal the verdict