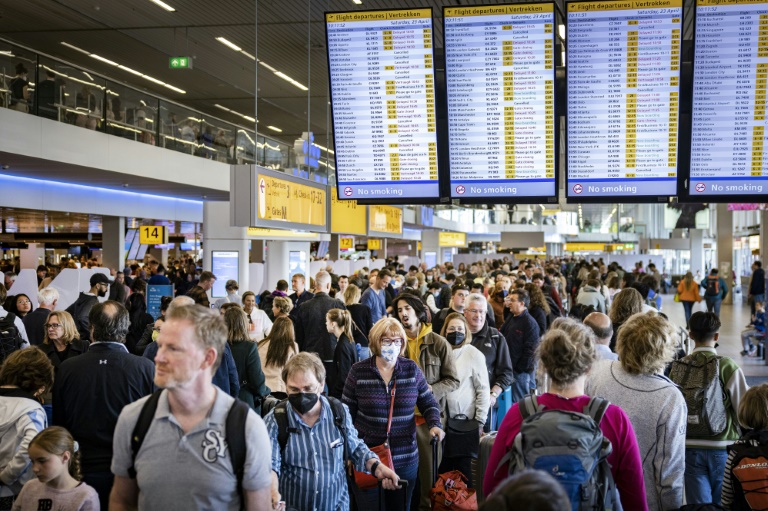 The Dutch airline KLM announced on Friday the cancellation of dozens of flights to and from Amsterdam Schiphol this weekend, after an appeal from the airport to airlines asking them to reduce the number of travelers in order to limit the high influx to the airport.

“Schiphol made the exceptional request partly in the context of the safety of travelers and employees,” said the airport, which is facing a shortage of staff coupled with high crowds during this school holiday period.

Airline companies “have complied” with this request, the airport said in a statement, which aimed to reduce the number of passengers by 3,500 on Saturday. This number would be “almost reached”.

KLM has so far canceled 47 flights (return and one-way) for Saturday and Sunday. 28 round-trip flights were canceled on Friday.

However, this request was deemed “scandalous” by the International Airline Trade Association (IATA).

“Passengers are booking flights weeks or months in advance,” IATA told Dutch news agency ANP. “Some of them will have to cancel their holiday plans. »

“As TUI, we want to reflect, but we are certainly not going to cancel flights,” a spokesperson for the group told the benchmark daily Het Financiele Dagblad.

KLM for its part explained that the cancellations were intended on the one hand to meet Schiphol’s request to “keep the processes at the airport manageable due to the lack of staff there”.

“On the other hand, these cancellations in KLM’s flight schedule contribute to reducing the workload,” KLM said in a statement.

Schiphol, Europe’s busiest airport by plane movements in 2019 – with more than 70 million travelers that year – has seen its numbers plunge during the pandemic.

But after the Netherlands dropped the majority of anti-Covid-19 restrictions in mid-March, passenger numbers have continued to rise.

Last Saturday, the first day of school holidays for many young Dutch people and when a peak of travelers was expected, KLM baggage handlers also went on strike to protest against the lack of staff and long working days.

The chaos was such at Schiphol last Saturday that the airport was forced to warn travelers not to go there and to close a motorway exit.

The action had led to the cancellation of the departure and arrival of many flights and caused a “very unpleasant start” to this holiday period, had deplored KLM.

According to Het Financiele Dagblad, Schiphol lacks 500 security guards out of a total of 5,000. There is also a high rate of absenteeism among employees.

The costs of travel delays and cancellations must be borne by Schiphol, several organizations have ruled.

Further discussions must take place between the airlines and the airport.