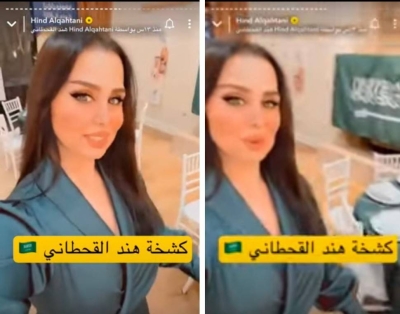 Al-Marsad newspaper: The famous “Hind Al-Qahtani” Snapchat documented, through a video clip she posted on social media, her celebration of the 92nd Saudi National Day, in her own way, with her children and friends in the United States of America.

Hind Al-Qahtani reviewed, during the video, her house, which she prepared in an appropriate manner for the Saudi National Day, where the flag of the Kingdom of Saudi Arabia was hung on the wall and her tables were decorated with green silk mattresses.

Al-Qahtani revealed that she had prepared a special cake, as she designed the cake in the form of a green square in the color of the Kingdom’s flag, and decorated it with white hearts and the number 92, which is the number of the National Day this year.

Hind Al-Qahtani showed her appearance during her celebration with her friends and children on the National Day, as she wore a green silk dress, with a thin cut.

Hind Al-Qahtani also coordinated with her dress, green shoes and a bright diamond ring, and reviewed her look in front of her followers via Snapchat.

When and where will Hurricane Ian hit Florida? See the updated forecast route