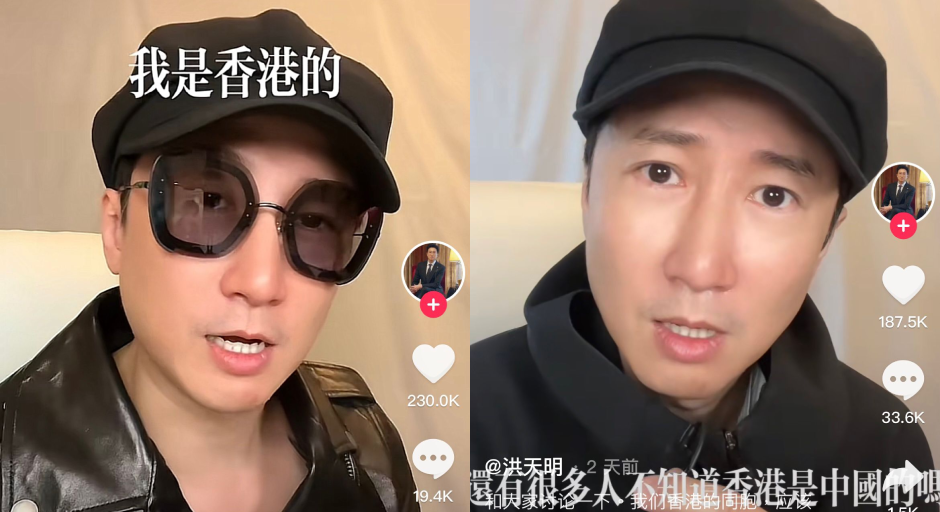 In recent years, Hong Tianming has shifted the focus of his career to the mainland. Recently, following the trend of “I am from xx (place name)”, the phrase “I am from Hong Kong” was criticized by mainland netizens while filming on Douyin. Filming clarifies: “Hong Kong must belong to China”

In the video, Hong Tianming sings “I’m from Hong Kong, from Kowloon, Hong Kong, and a handsome boy from Kowloon. This is what the Hong Kong dialect says, my father is called “Lao Dou”, my mother is called “Old Mother”, and my wife is called “Tiger”. I love “Tiger”. 』” and other lyrics, because Hong Tianming did not mention Hong Kong, China, which made mainland netizens feel dissatisfied, and left messages: “First of all, you have to be Chinese before you can be Hong Kong”, “Where is Hong Kong”, “Wrong, Hong Kong, China, Thank you”, “Aren’t you from China?” and so on. However, there are netizens who support them, saying that some people are too sensitive. In fact, many places will not add the word “China”: “Netizens are really super sensitive”, “How many people say they are from China”, “I am Shanxi, should I add Shanxi, China?”, “Yes. Don’t stress, I am from Shandong, Jinan, Shandong” and so on.

However, in order to calm the turmoil, Hong Tianming immediately made another film to explain that Hong Kong must be part of China: “It has been so many years since Hong Kong’s return, do many people still know that Hong Kong belongs to China?” “Hong Tianming” introduced himself, but he was once thought that it was strange to say this to mainlanders. The other party said that everyone knew that Hong Kong was China, and there was no need to classify him, so he slowly changed his habit, unless he was asked by foreigners abroad first. Will answer: “I’m from China (I come from China)”, “China Hong Kong (Hong Kong, China)”.

Lamborghini participates in WEC and IMSA in 2024 with LMDh vehicle[F1-Gate .com]