Düsseldorf, Erfurt The summer of 2020 started with a shock for almost 5000 employees of Karstadt and Kaufhof: 56 branches, a third of all locations, have to close, the company announced. “The effects of the unpredictable corona crisis and the officially ordered week-long closings of the houses force us all to make this painful cut,” said Arndt Geiwitz, the general representative of Karstadt-Kaufhof, justifying this step.

The closures hit medium-sized cities as well as metropolises – and these are exactly what are now fearing for their centers. Karstadt and Kaufhof department stores are often in the best locations. They wanted to be shopping paradises on several floors and thousands of square meters.

It is unlikely that another large department store operator will take over the property in times of growing online trade. The future: uncertain, especially now that the corona crisis has decimated the frequency of pedestrians and thus sales. Cities and property owners are now struggling to find concepts to keep life in the city center.

“For a municipality, the closure of a department store is a blow to the store. The concerns are therefore justified, ”confirms Lars Jähnichen, managing partner of IPH Handelsimmobilien.

But the expert also gives cautious hope. “Most locations are in such a good location that a viable concept can be developed for them again,” he says. In the past, the poorer department store locations had rather been given up, and even good locations were usually found even for these.

At the location of the Wöhrl-Plaza in Dresden, in future only one floor will be used for shopping and sleeping over it.

Indeed, large-scale stationary retail has been struggling for years. The department store chain Hertie filed for bankruptcy eleven years ago. In 2001 Kaufring went bankrupt. Real is currently being smashed, and up to 30 chain stores are likely to fall by the wayside. Kaufhof and Karstadt have also repeatedly given up individual houses.

Concept ideas for real estate are therefore often played out. At the beginning of this year, the brokerage firm Aengevelt and the cultural consulting firm Projektschmiede presented their idea of ​​moving the opera to the Kaufhof am Wehrhahn location. The concept envisaged a glass, partly green facade. There was no talk of the now decided closure of the branch, mind you.

Creative ideas are necessary. Because the large department stores have so far had a magnet function for inner cities. “If the houses are closed, this has a significant negative impact on the surrounding retail trade,” says trade expert Gerrit Heinemann from the Niederrhein University of Applied Sciences. At worst, entire shopping streets in medium-sized cities could be threatened with extinction if the anchor trader could not be quickly replaced.

It is precisely this process of finding that Stefan Müller-Schleipen wants to accelerate. His company Immovativ specializes in the networking of municipalities and the real estate industry. In a survey of 265 municipalities and counties, he found out: 40 percent expect a higher vacancy rate for commercial real estate due to the corona crisis.

To prevent the dying of the inner cities, Müller-Schleipen founded “Die Stadtretter”. Municipalities, consultants and the real estate industry should be able to talk to each other on its platform. This is free for municipalities, the others have to pay. The goal is not just isolated solutions for individual communities. The platform should also show examples of successful conversions.

In Müller-Schleipen’s view, this also includes the redesign of Hanau’s Freedom Square. The Hertie department store closed here in 2010. Vacancy followed for years. Then the square was redesigned: the forum was used to bring a shopping center into the city, create space for restaurants and the city library. “The redesign improved the quality of stay,” says Müller-Schleipen.

The former Horten and later Kaufhof on Berliner Strasse in Düsseldorf also got a new life. On the ground floor and in the basement, Edeka Zurheide developed a huge food market with a focus on delicacies and gastronomy. Even the gourmet restaurant “Setzkasten” was integrated, which is just the first Michelin-Star got. A hotel was built above it. But the renovation work lasted for years, not least because of the dilapidated structure. In Hamburg-Altona, the abandoned Karstadt was therefore completely torn down. There, the furniture giant Ikea then built its first city center, which could possibly be followed by others.

Not a standard solution for all cities

But if these examples are encouraging – they are not suitable as a blueprint for all city centers. “There is no silver bullet for a new use for former Karstadt or Kaufhof houses, an individual solution must be found for each location,” says trading expert Jähnichen, whose company IPH has already commissioned investors for five properties, the Galeria Karstadt Kaufhof wants to give up, develops new concepts. “One thing is clear: the conversion of a department store is not a sure-fire success. It requires significant interventions in the building and therefore high investments. That is why the new concept should be well considered and not a quick shot, ”he warns.

The example of Mönchengladbach-Rheydt shows how difficult it is for cities to react correctly to the death of department stores. Karstadt wanted to close his house in the city on the Lower Rhine five years ago. To preserve the location, the urban development company EWMG bought the property from Highstreet. The solution: the rent was reduced and Karstadt reduced its area. Aldi, Rossmann, Action and Deichmann subsidiary MyShoes moved into the 5300 square meter basement as additional tenants. According to the EMWG, it invested a medium single-digit million amount in the renovation. But the joy didn’t last long.

Now the Karstadt branch in Rheydt is again on the list of 58 locations that Galeria Karstadt Kaufhof wants to close. Now the city is again fighting desperately for the preservation of the department store – and is doubly affected because it is now the owner.

The temptation to maintain their central department stores with the help of local authorities is particularly great. But that could be a bad idea. Small cities would have to “think very carefully about whether they will continue to pursue the vision of the shopping city,” says retail expert Heinemann. It should also not be taboo to make department stores disappear. You could use the space for other things, such as living space. “Better a nice sleeping town than an empty and ugly shopping town,” is how Heinemann describes this radical motto.

There is no alternative. Heinemann thinks it is possible for city centers to come back to life when local shops, which in the past have often only been created in retail parks on the outskirts, return to the centers. This would also be in line with the idea of ​​banishing cars from cities and making all important supply functions accessible on foot or by bike. Retail would also be part of it, just not in the XXL dimensions of a department store.

The difficulties of the retail trade can be seen in the analyzes of the real estate service providers. While yields on almost all asset classes have fallen in recent years, they have recently risen in retail. So investors are demanding a higher risk premium. After all, the market is still working. In the first half of the year, retail properties were traded for EUR 6.9 billion, 38 percent more than in the same period last year. The decisive factor for this, however, were retail parks, i.e. those that are mostly located on the outskirts of the city and often house hardware stores in addition to supermarkets. They represented more than half of the turnover.

Despite the obvious difficulties of retailing in city centers, Frank Emmerich, retail expert at CBRE, continues to believe in its raison d’être, even in times of online trading. E-commerce currently accounts for 11 percent of sales. “Even if the share rose to 20 to 25 percent, the majority of the purchases would still be made in-patient,” says Emmerich.

Similar to Heinemann, he sees the return of local shops to the cities. An Aldi Süd has just opened in Düsseldorf’s old town, and recently a Lidl at the nearby Carlsplatz. Discounters in the best locations would have been unthinkable just a few years ago.

Meanwhile the time of the big department stores seems to be running out. It is getting smaller, says IPH managing director Jähnichen. Trade alone works up to the first floor. Mixed use from trade, living, offices, hotel or even logistics take the place. The logisticians were looking for decentralized areas from 2000 to 3000 square meters for urban distribution centers. This could also be a future use of the department stores.

Comeback of the commercial building

Values ​​Real Estate focuses on retail properties. Your managing director Carsten Fischer is certain: “The classic commercial building is coming back.” His company is working on it himself: In Dresden, Values ​​Real Estate bought the Wöhrl Plaza on the shopping mile Prager Strasse, which was once designed for the department store of the same name in the 1990s . The Dresdeners shop on several floors. In the future, retail will only take place on the ground floor and a hotel will be built above it. A supermarket moves into the basement. A connection between work and living environments is important. 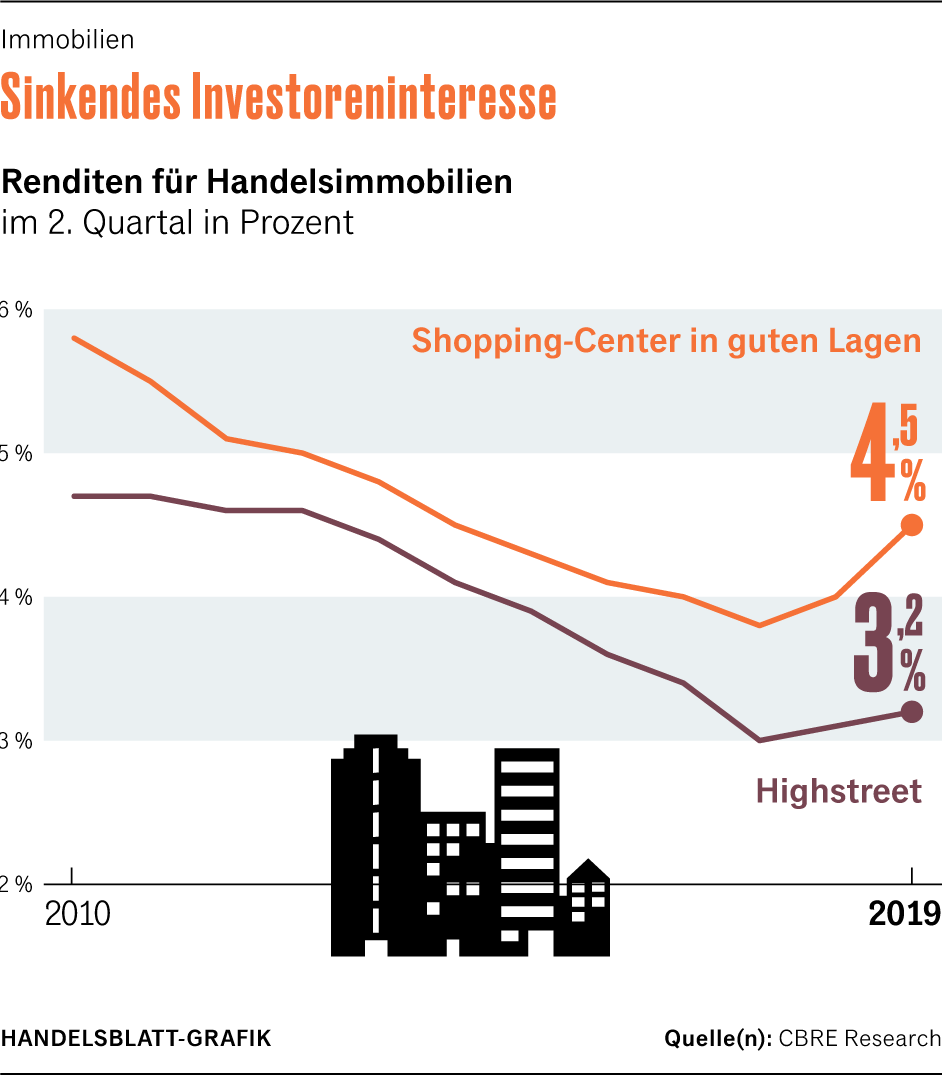 Fischer’s portfolio also includes four Kaufhof and Karstadt stores to be closed, one in Trier and three in Berlin. Fischer does not want to lose many words about it. He was of course in negotiations. And: “We actually want Karstadt and Kaufhof to stay.” Nevertheless: He always has a plan B for all his purchases.

The cities are open to changes of use, as is shown by the example of the Kaufhof at the Düsseldorf Wehrhahn. Mayor Geisel considers the plans for an opera at this location to be unrealistic, as he recently explained. But he also made it clear: this is not a B location. There are even plans for the Kaufhof property that investor René Benko presented to the city, apparently a high-rise building that would also be permitted there according to the high-rise master plan. With an otherwise high quality, this could be a positive thing, Geisel is quoted in the press.

The poker game for the future of department store real estate has just started.

More: Trend quarter 2020 – Where rents and purchase prices rise the most.

Michael Jackson: those freezing revelations about his last hours