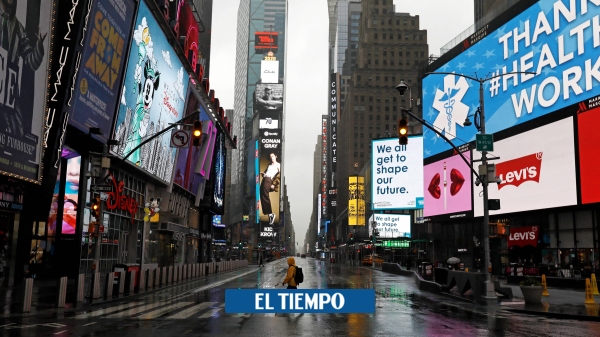 When New York City was registering its peak of the pandemic, reported tragic figures of almost 600 deaths per day and accumulated a total of 21,700 dead.

Now, the city has a ray of hope after registering this Thursday its first day without deaths from covid-19 since March 12.

These are the reasons that aggravated the pandemic in New York and the measures that achieved the situation to improve little by little.

Why did the situation get worse?

The capital of the world, as New York is known, had several characteristics that facilitated the spread of the virus. New York is one of the most populated cities in the world. It has 8.6 million people and a population density of more than 10,000 inhabitants per square kilometer.

In addition, the transport -metro- It moves 5.5 million passengers a day, its restaurants used to be crowded and massive events – concerts, theaters, etc. – were the daily life of the city. New York has 27,000 restaurants and 10,000 bars.

(It may interest you: Unemployment rate in the US drops to 13.3 percent)

Times Square. This point on the island of Manhattan is one of the largest shopping and entertainment centers in the world.

What measures were taken?

The city and the state implemented a plan called “New York on hiatus”, that only allowed the operation of essential services, the rest of the people who did not operate in those services had to stay at home. In addition, the meetings were suspended (parties, events, etc).

The recommendation was also extended to the elderly population to stay at home, respect for social distancing and limitation of outdoor activities.

The city and state implemented a plan called ‘New York on hiatus’, which only allowed the operation of essential services

After the figures offered this Thursday by the spokeswoman of the city, Avery Cohen, The city is expected to begin its reopening plan this Monday, June 8.
​
For the reopening, State Governor Andrew Cuomo specified that a drop in infections should be registered for at least 14 days and have at least 30 percent free beds in hospitals, in addition to guaranteeing a number of tests and personnel for tracking.

Therefore, the mayor of the city, Bill De Blasio, announced that New York will have 123 new places to test for coronavirus the seven days of the week.

The city also partnered with City MD Urgent Care to do more than 6,000 tests daily.

Memorial in Green Wood Cemetery, in Brooklyn, New York, in honor of those who died from the new coronavirus. The United States reached the figure of 100,000 deaths.

De Blasio He also announced that hotels will be available for those who are infected and they need to isolate themselves to avoid intra-household contagion.

When New York is cleared to enter phase one manufacturing and construction will be reactivated. The second phase will include the return of professional services and the real estate sector.

The third includes the reopening of bars, hotels and restaurants, and in the fourth and final phase, the return of cinemas and theaters.