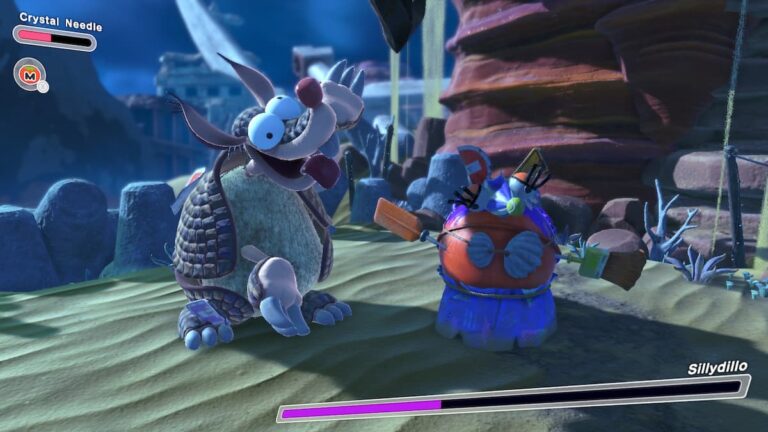 Sillydillo is the fifth main boss in Kirby and the Forgotten Land. He guards the game’s fifth territory, Oringull Wasteland, and seems to have an affinity for waste. Beating him is the only thing you need to do to clear the stage, Collector in the Sleepless Valley, and open the game to the sixth main area of ​​exploration.

Tips for Defeating Sillydillo in Kirby and the Forgotten Land

When you land in the Collector Stage in Sleepless Valley and go down a bit, you’ll see a Maxim Tomato, and you can choose one of the evolved versions of Hammer, Bomb, or Needle before facing the boss. Much like King Dedede was last time around, Sillydillo is the toughest boss yet.

Crystal Needle is perhaps your strongest copy ability to use against this goofy armadillo. Pink crystal attacks from this copy ability can deal serious damage by mashing the action button, especially when Sillydillo lands on his armored back and is momentarily vulnerable. The Hammer’s slower attack speed makes it the more difficult choice for this fight.

Once the fight starts, Sillydillo will try to cage you with a swoop. You can jump over the cage, but if he catches you, just flick the joystick to free yourself. He’ll take a few moments looking confused and wondering why you’re not in the cage, so use them to attack with your ability or shoot the stars from a distance to deal good damage like normal Kirby.

Related: How to beat King Dedede in Kirby and the Forgotten Land

Beware of rolling and spinning attacks in phases two and three

Phase two begins quickly, as soon as you deplete about a quarter of Sillydillo’s health. It will collapse and smash you both through the ground, at a lower level so you can both face off at a higher intensity. You need to use expert timing to get out of the way, much like a coiled Sillydillo towards you. It will do this three times, and when you successfully swipe, the game action will momentarily go into slow motion.

If you are sideways after the first of three dodges, be ready again for the second immediate bowling throw. After the third throw and a successful dodge, attack because he is stunned! So be prepared for phase three, which includes attacks with an unwanted dummy that Sillydillo comes out to pose with.

This is where the difficulty factor increases. Avoid the spinning attack, which isn’t aimed at you, and try to dodge when Sillydillo throws the dummy in your direction. It’s strong, especially since it will immediately continue its rolling attacks that you will again have to dodge by sliding with good timing.

Beating Sillydillo and completing the other missions may take practice and multiple attempts. Try to perfect your moves and consider using some of the Treasure Road stages to master your skills with each copy ability. Otherwise, consider packing a Maxim tomato with you to use in a pinch, especially in phase three. With that, congratulations on defeating the fifth main boss of Kirby and the Forgotten Land!

The “Great Quit” continues in the US: 4.4 million quit