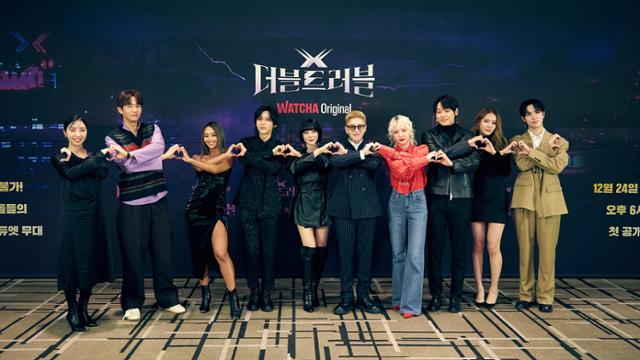 The cast of ‘Double Trouble’ was tested for COVID-19. Provided by Watcha

While Kim Dong-han, a member of the group We-I, who appeared on ‘Double Trouble’, was diagnosed with Corona 19, singer Hyorin also reported the infection. Singer Im Seulong Choa and group Weekly’s Monday were tested negative.

On the 25th, Wie Entertainment, the management company, announced through an official statement that Kim Dong-han was infected with Corona 19. He continued, “In the case of ‘Double Trouble’, before the recording on the 24th, after testing the self-diagnosis kit, we confirmed the negative reaction and proceeded with the schedule.”

Stars appearing on Watcha’s ‘Double Trouble’ with Kim Dong-han were tested for COVID-19. Hyorin is infected with COVID-19. On the 26th, Hyorin’s agency, Bridge, said, “Hyorin had completed the second vaccination, but as a result of the test, it was confirmed.”

There are also performers whose test results have not yet been released. An official from Jeon Ji-woo’s agency DSP Media said, “We are currently waiting for the results of the Corona 19 test.” A representative from KQ Entertainment also said, “Taeil is waiting for the test results.” MCs Kim Ji-seok and Jang Do-yeon and performer Jang Hyeon-seung and Gong Min-ji are also on standby after being tested for COVID-19.

Crisis in Ukraine: Germany under fire from critics

Finally, good news… Global Health is promising: We are approaching the end of Corona!