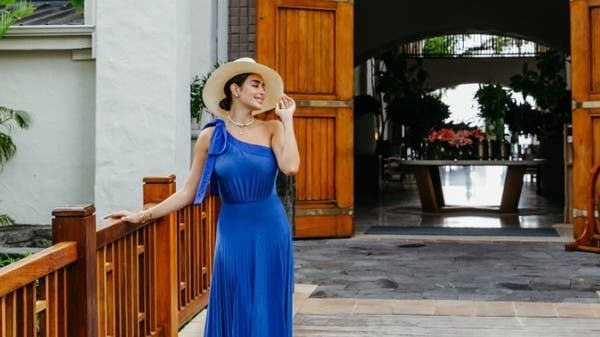 In her first appearance, after announcing the news of her divorce from Egyptian businessman Ahmed Abu Hashima, Egyptian actress Yasmine Sabry published recent photos of her through her account on “Instagram”.

The Egyptian star appeared wearing a blue dress from Mauritius, which she had previously worn in photos collected by her ex-husband Ahmed Abu Hashima in 2020.

I also attached a comment with the three pictures, and wrote, “Good morning to our beautiful world.”

It is noteworthy that on May 5, news of the separation of the Egyptian star and businessman topped the conversations of social media platforms and Egyptian and Arab newspapers, after sources close to the two parties confirmed their validity in press statements to local media.

The public was also surprised that each of them deleted the photos they had collected on social networking sites, from their personal accounts, which further confirmed the news of the divorce.

While local websites and Egyptian newspapers circulated news that the cost of the couple’s divorce amounted to nearly 300 million Egyptian pounds (about 17 million dollars).

No dowry, no back

In turn, Yasmine Sabry broke her silence, to deny this in detail, confirming that she married Abu Hashima on April 17, 2020, without a dowry or dowry delay.

She said in statements to the Egyptian newspaper, “Sada Al-Balad”, that her ex-husband was already a very generous husband with her during the marriage, and he was surprising her with gifts, but what was said about her obtaining 15 million pounds, a lens factory or a clothing factory, and owning 24 cars, is completely incorrect.

In turn, the head of the Union of Arab Producers, Ibrahim Abu Zekry, blew a surprise, noting that his compatriot gave up her material rights for the sake of divorce.

It is noteworthy that Ahmed and Yasmine were married two years ago, specifically in April 2020, and chose to hold the marriage contract in a family atmosphere, which was absent at the time, the father of the bride, due to the crises that occurred between him and his daughter, while the marriage did not result in children.

Wo Shen: If the Bucks can advance to the Eastern Conference finals, Middleton will likely come back – yqqlm