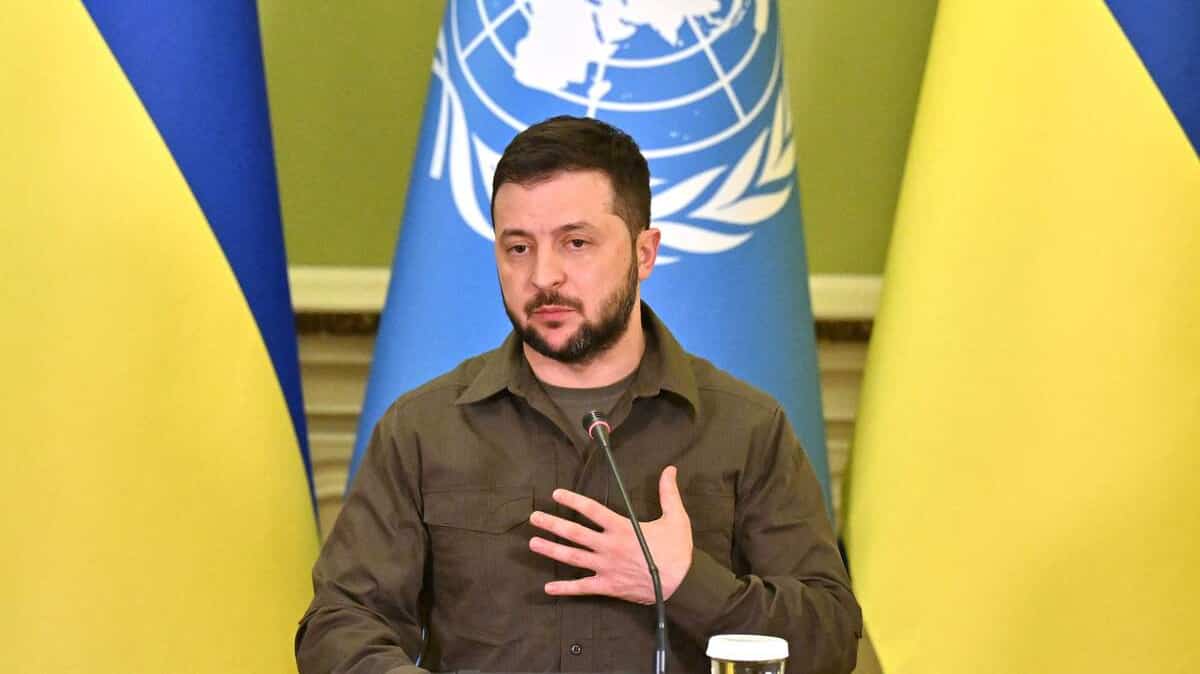 Ukrainian President Volodymyr Zelensky on Monday called on EU leaders meeting at the summit to “stop their bickering” to quickly adopt a sixth package of sanctions against Moscow, in particular an embargo on Russian oil blocked by Budapest.

• Read also: Germany ready to facilitate the reception of Russian opponents and journalists

“The quarrels in Europe must stop (…), Europe must show its strength. Because Russia only understands the argument of force,” said the Ukrainian leader by videoconference.

Unlike his last video intervention at a European summit in March, during which he attacked Hungarian Prime Minister Viktor Orban, he refrained from stigmatizing anyone.

“I’m not accusing any of you,” he said. “What is happening is solely the fault of the Russian state.”

European leaders were trying in Brussels to find an agreement on a gradual embargo by the end of the year on Russian oil, which would allow the adoption of the 6th package of sanctions. But Hungary conditioned its green light on guarantees on its supply.

The draft conclusions of the summit, consulted by AFP, provide for the adoption “without delay” of the new set of sanctions, including this embargo, “with a temporary exemption for crude transported by pipeline” in order to lift the veto of Budapest . The extension of the embargo to pipeline deliveries will then be discussed “as soon as possible”.

“We are confident and determined (on an agreement). Now, there is always an unknown who is Viktor Orban”, acknowledged French President Emmanuel Macron, whose country holds the rotating presidency of the Council of the EU.

The Hungarian sovereigntist leader has since his arrival made new demands. “There is for the moment no compromise” acceptable, he warned, demanding assurances in the event of a cut in the Druzhba oil pipeline which supplies his country via Ukraine.

Hungary, a landlocked country without access to the sea, depends for 65% of its consumption on oil transported by Druzhba. It had opposed the initial proposal for an embargo, unless it benefited from a period of at least four years and around 800 million euros in European funding to adapt its refineries.

It now claims to be able to be supplied with Russian oil by sea if the arrival by pipeline were to be stopped. “This is the guarantee we need,” said Mr. Orban.

Unanimity is required for the adoption of sanctions. The draft conclusions are submitted for discussion to the Heads of State and Government.

According to a diplomat, an agreement on a gradual embargo confined to oil transported by boat (i.e. 2/3 of European purchases of Russian oil) could be formally ratified “probably this week” after a political green light from the leaders.

Negotiations will then take place to also stop imports via Druzhba (1/3 of European supplies), whose northern branch serves Germany, Austria and Poland, and the southern branch serves Hungary, the Czech Republic and Slovakia. No deadline though.

Berlin and Warsaw have also pledged to stop, even if they are not forced to, their imports by Druzhba, according to European sources. In total, 90% of Russian oil exports to the EU would be affected.

For Moscow, however, it is easier to find other buyers for its exports by tankers than by pipeline.

Estonian Prime Minister Kaja Kallas was cautious about an agreement at this summit. “We will try to achieve this by” the next European Council in June, she said, pleading for “a realistic approach”.

Member States fear that the pipeline supply exemption will distort the conditions of competition for oil purchases.

Under negotiation for a month, the new sanctions package also provides for an expansion of the EU blacklist to around 60 personalities, including the head of the Russian Orthodox Church, Patriarch Kirill.

It includes the exclusion of three Russian banks from the Swift international financial system, including Sberbank, the country’s main institution.

The two-day summit is to address the consequences of the war-related food crisis, the continent’s energy transformation to do without Russian gas and a proposal for financial aid of up to nine billion euros to Ukraine in 2022. .

The Moutaraji, heroes of Wydad Casablanca