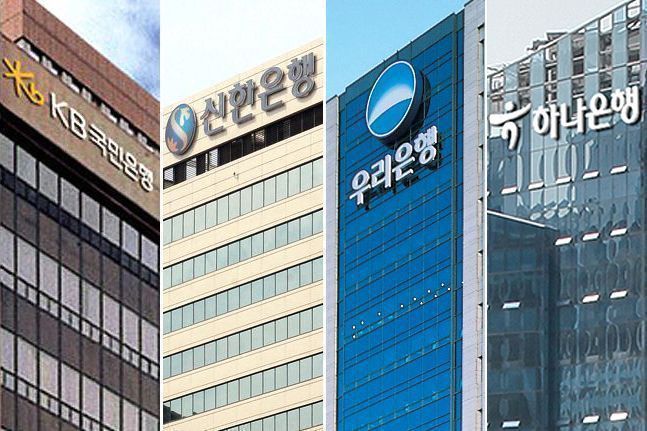 Trading assets 8 trillion ↑ in one year

A view of the main branches of the 4 largest banks in Korea.ⓒDailyan

The amount of trading assets invested by the four largest banks in Korea in various financial products increased by more than 8 trillion won in one year, reaching 90 trillion won. It is interpreted as a step towards reducing the dependence on loan interest margin in the profit portfolio.

In the meantime, however, concerns over investment risk management in the banking sector are growing as unrest in the domestic and foreign financial markets is spreading.

According to the financial industry on the 16th, as of the end of the first quarter of this year, the total assets for trading of four banks, including KB Kookmin, Shinhan, Woori, and Hana Bank, totaled 86.46 trillion won, up 11% from the same period a year earlier. In terms of the amount, it increased by 8,5672 trillion won.

This means that the amount of money the bank is investing in financial products to generate revenue has decreased by that much. The trading department in the bank predicts the market price of bonds, stocks, and derivatives, and trades them to make a profit.

By bank, Shinhan Bank’s trading assets stood at 25.577.6 trillion won, up 0.7% from the same period, maintaining the highest.

The reason why the banking sector is growing the trading sector is the growing importance of non-interest income.

Although interest margin, which is a key profit, is expanding thanks to interest rate hikes, there is no choice but to limit growth with loans that are mostly dependent on the domestic market. This is why the banking sector is paying attention to non-interest income as a stepping stone for a new quantum jump.

The problem is that the environment in the investment market has been shaken up recently. Uncertainties surrounding the financial sector are spreading, including tightening monetary policies by central banks in each country to control inflation, geopolitical risks following Russia’s invasion of Ukraine, and confusion in the process of a soft landing of the novel coronavirus.

The financial authorities were also concerned about this reality and entered into an emergency system. At a joint financial market inspection meeting with related institutions held on the 14th, Vice Chairman Kim So-young of the Financial Services Commission said, “We will closely inspect related measures in advance and respond if necessary so that market stabilization measures can be implemented in a timely manner.”

At an executive meeting held on the same day, the Financial Supervisory Service Chairman Lee Bok-hyeon also ordered, “I ask that you take measures to stabilize the financial market quickly so that the phenomenon of concentration due to psychological overreaction does not worsen amid growing volatility in the domestic financial market, such as rising interest rates and falling stock prices.” .

An official from the financial sector said, “The expansion of trading in the banking sector is an irresistible trend in the long term, but in the current situation where interest rate risks are increasing, it is necessary to reorganize the investment portfolio focusing on safer assets.”

Johnny Depp perfume is sold out all over the world!British online shopping Dior Sauvage 15% off the official website to buy guide