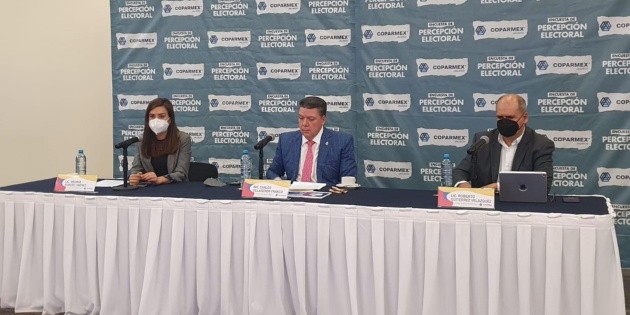 In Guadalajara and Zapopan, at least eight out of 10 citizens qualify as “very important” or “something important” to go out to vote during the elections next Sunday, June 6, according to the latest Electoral Perception Survey, presented this Sunday. by the Employers’ Confederation of the Mexican Republic (Coparmex) in Jalisco.

“We are already having participation of over 80 percent of the people who are going to vote. The great democratic exercise that we have on June 6 is our holiday, let’s go out to vote in a free, responsible and civic way, ”said Carlos Villaseñor Franco, president of the employers’ organization.

He added that it is necessary that, eight days after the election, citizens continue to be informed so that they responsibly choose those who will occupy a popularly elected position, mainly those who have not yet decided who they will vote for.

As revealed by the exercise, 83% of those surveyed in Zapopan say they have defined their vote, while in Guadalajara 79% declared the meaning of their suffrage decided.

Of this total, according to the data presented in the exercise, on average 35.5% of voters decided to vote before the campaigns, 27.5% did so during the first month of campaigns, and 18% defined it in the last month of the contest. electoral.

According to the coordinator of the survey, Roberto Gutiérrez, of those who responded have not defined their suffrage, the majority said that it is simply because “they have not decided yet”, because “all the candidates are bad” or because they “do not want to participate in Election Day ”, although there were also those who preferred not to answer the question, arguing that“ the vote is secret ”.

The survey also presented results on the intention to vote for the municipal presidency of Guadalajara and Zapopan, and for the federal and local councils in districts 4, 6, 10 and 13, in Zapopan, and 8, 9, 1 and 14, in Guadalajara.

The exercise was carried out by the Xtrategia GDL polling station on 2,400 people with valid voting credentials in the municipalities and districts referred to.