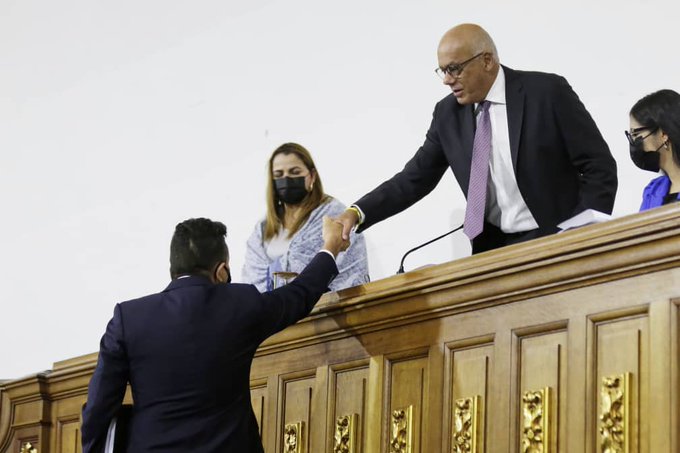 Samuel Moncada, Venezuelan ambassador to the UN, appeared before the AN.

Jorge Rodríguez, president of the National Assembly (AN), emphasized that Venezuelan and international justice must continue its course to punish those who have attacked the people and the national government.

He stressed that from the country, a dialogue is promoted that does not have the purpose of pardoning the crimes that have been committed against the homeland.

“No one is willing to be negotiating, forgive abominable crimes, forget about it, because it will never happen,” Rodríguez stressed.

He mentioned this, after the presentation made by the Venezuelan ambassador to the United Nations (UN), Samuel Moncada, in the AN on the plans of the United States (USA) to end peace and stability in the country.

“Only clarity in the defense of our homeland has taken us to where we are, we went through the second war of independence in Venezuela, only unity is what saves us, if we divide, they kill us,” said Moncada.

He narrated how Donald Trump, in a supposed alliance with the Venezuelan opposition and the Colombian government, promoted a set of plans that sought to end the country’s fundamental services, carry out the assassination of the President of the Republic, Nicolás Maduro, the theft of oil and the assets of the country.

He stressed that the blackout of March 7, 2019, was to facilitate an internal conflict, mobilize the coup forces and for the US to invade.

He added that on April 30 of the same year, the Venezuelan right tried, with the so-called “Operation Libertad”, to generate an internal clash so that external forces would invade the nation.

He pointed out that, in the midst of the pandemic against covid-19, the arrest of oil tankers and a direct attack on the Port of Jose in Anzoátegui were also promoted, to prevent the arrival of hydrocarbons to the country from Iran.

He listed some of the plans, among which are: direct military invasion, assassination of President Maduro, maritime air attack and with Colombian and Venezuelan mercenaries, cyber operations against vital infrastructure, military pressure with missiles, war attacks disguised as military operations and plus.

That informationInstantly on your cell phone. Join the Diario Primicia group on WhatsApp through the following link: https://chat.whatsapp.com/Fr9gVHN4A436nOIw6sepgk