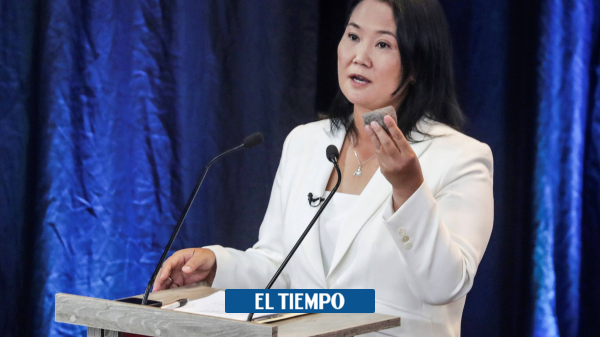 An anti-corruption prosecutor He requested this Thursday preventive detention for the right-wing candidate Keiko Fujimori, which further raised the tension in Peru by the dropper definition of ballot Sunday’s presidential election, led by leftist Pedro Castillo.

(You may be interested in: Peru elections: new president to be known within 10 days)

The progress of the recount was agonizing this Thursday, in the face of challenges to the minutes and allegations of fraud, and the winner of the election had not been proclaimed. Despite this, the Argentine president, Alberto Fernández, congratulated Castillo as “president-elect of Peru.” The greeting from Buenos Aires was added to that of the former presidents of Bolivia Evo Morales and Brazil Luiz Inacio Lula da Silva.

Fernández’s congratulations provoked a “note of protest” from the Peruvian Government to the Argentine ambassador in Lima, “indicating that the final results of the 2021 General Elections” had not yet been “announced by the electoral authorities”.

Later, Castillo also received congratulations from the President of Bolivia, Luis Arce, and the Vice President of Nicaragua, Rosario Murillo.

In the Fujimori camp, the prosecutor Jose Domingo Perez He asked the anti-corruption court “to revoke the appearance with restrictions (conditional release) and to order preventive detention again against the defendant Keiko Fujimori”, for violating the prohibition to meet with witnesses in the Odebrecht case, for which she is under investigation.

“There is no fear that this preventive detention will take place,” Fujimori said in his first reaction to the prosecutor’s request, denying that he had breached rules of conduct imposed by justice. “There is a clear intention to distract us, disturb us from the process” by prosecutor Pérez, added the candidate.

Fujimori, who will have to go to trial in this case if he loses the ballot, held a press conference on Wednesday with the Fujimorist Miguel Ángel Torres, a witness in the Odebrecht case, to ask the National Elections Jury (JNE) to annul the results of 802 polling stations – some 200,000 votes – for alleged irregularities.
Prosecutor Pérez’s request further irritated spirits in a country that continued this Thursday without knowing who its new president will be four days after the vote.

The elections in Peru were held this Sunday.

Fujimori had denounced “evidence of fraud” on Monday and on Wednesday asked to annul those 200,000 votes, accentuating the climate of uncertainty after years of political upheaval, which led to the swearing in of three presidents in five days last November. “It seems that she wants to question the entire electoral process. This uncertainty, whoever wins, is going to hit the national mood a lot, “said analyst Hugo Otero.

The revision requests could be decided in about 10 days in the JNE, so the contest is still open, with a fall since Monday in the Lima stock market.
With 100 percent of the electoral records processed and 99.295 percent accounted for, until the closing of this edition Castillo obtained 50.2 percent of the votes and Fujimori, 49.8 percent.

Cardinal Pedro Barreto called the actions that question the electoral process “irresponsible” on Thursday and asked the candidates to accept “the popular will.”

Castle outdone by 70,000 votes to Fujimori and he has delivered messages in a victorious tone, but if the JNE agrees with Fujimori, that trend could change. “Keiko alleges (as a fraud) that there are polling stations in Cusco that have 90 percent of votes for Castillo, but she has not said that in La Molina (a wealthy district of Lima) there are tables that have 90 percent for her”, Otero indicated.

The president of the Jury, Jorge Luis Salas, expressed his surprise at Fujimori’s request to annul 802 tables and recalled that in 2016 “there were only complaints against 29 tables.” The electoral body (Onpe) denies the possibility of fraud, as does the Mission of Electoral Observation of the Organization of American States (OEA), which described the process as normal and transparent. The Onpe organizes the vote, but the JNE reviews the results and proclaims the winner. Both public bodies are autonomous.

For their part, the 17 former heads of State and Government of the Democratic Initiative of Spain and the Americas (Idea), among which are the former presidents of Argentina Mauricio Macri, of Colombia Andrés Pastrana, of Mexico Felipe Calderón, among others, asked to the candidates “to maintain citizen peace and wait for the constitutionally competent bodies to issue their final resolution.”

– Keiko Fujimori asks to annul 200,000 votes of the elections in Peru
– ‘There is no fraud in Peru, only isolated cases to be investigated’