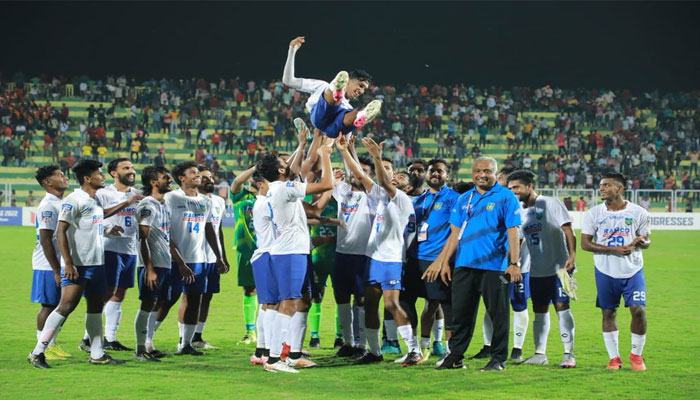 Manjeri: Santhosh Trophy 2022: Kerala in the final of the Santosh Trophy. In the semi finals, Kerala defeated Karnataka by seven goals to three. While Jasin scored 5 goals for Kerala, Arjun and Shegil scored one goal each. Kerala came back into the game after trailing by one goal in the 24th minute.

Jesse’s hat-trick in the 30th minute brought Kerala back into the game. This is the first time Kerala has scored five goals in a Santosh Trophy match.

The first half of the Kerala-Karnataka match saw all the fighting spirit of the semi-finals. In the first XI of the last match, Kerala included Nijo Gilbert as Salman’s replacement. Kerala started slowly in the first few minutes and later changed the style of attacking. Kerala got many opportunities but became an off side villain.

Earlier, Asif Safeer scored the most goals for Kerala in the Santosh Trophy. Safir scored four goals that day. In the final, Kerala will face the winners of the Manipur-Bengal semi-final.

The latest news is now in your hands … News is available in Hindi, Tamil, Telugu and Kannada besides Malayalam. ZEEIndustanApp Click on the link below to download …