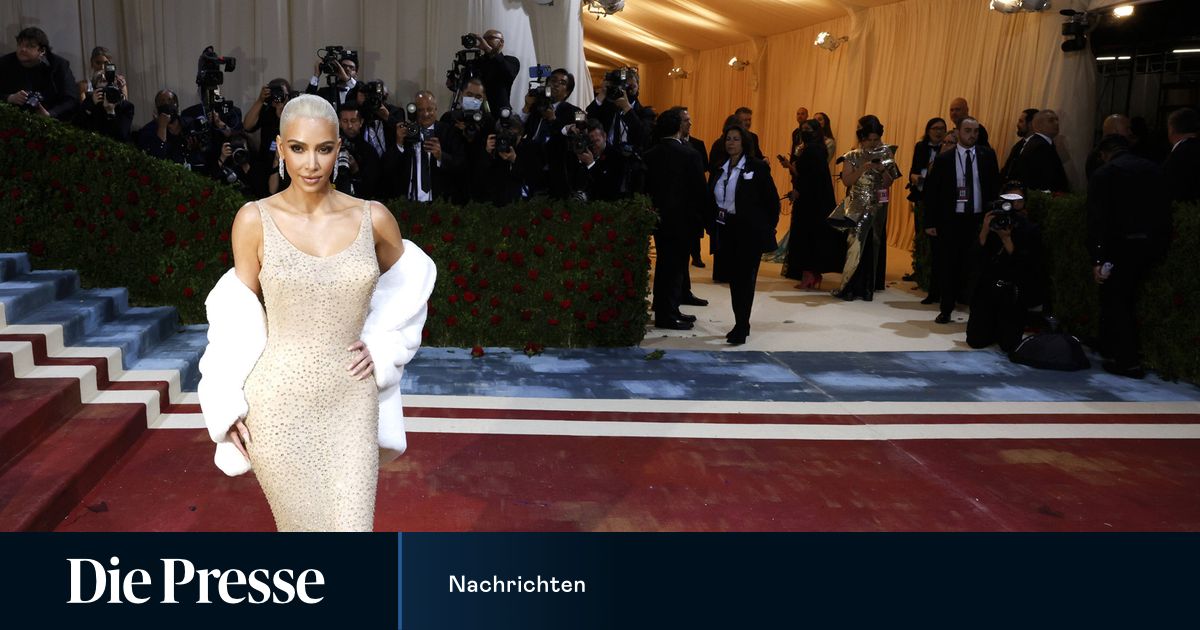 In early May, Kim Kardashian made a spectacular appearance in a historical dress at the Met Gala. Now the dress in which Marilyn Monroe once sang “Happy Birthday” is said to be damaged.

It is the highlight of the fashion year: the benefit gala of the Metropolitan Museum of Art in New York, which took place at the beginning of May this year under the motto “Guilded Age” and was held regularly for the first time since Corona. Entrepreneur and reality TV star Kim Kardashian appeared in the dress in which Marilyn Monroe was President in 1962 John F. Kennedy “Happy Birthday” sang. As in the previous year, she wore one of the most sensational outfits of the evening.

However, the accusations that are now coming from Scott Fortner, who after all manages the world’s largest private collection of Monroe’s possessions, are also causing a stir. As he explains in several posts on Instagram, the 60-year-old dress is said to have suffered considerable damage from the appearance.

In the before and after comparison, he points out that not only are individual crystals missing from the dress that was specially made for Monroe, but that the fabric on the zipper is also damaged. Fortner critical: “Was it worth it?”

Since 2016, the dress, valued at five million dollars, has been owned by the Ripley’s chain of museums and is normally kept in a darkened and specially temperature-controlled safe. After intensive discussions, the museum was finally persuaded to let Kardashian wear the dress. As early as May, Amanda Joiner from Ripley’s told “Daily Beast” that there had been two fittings beforehand and that the dress had never been unsupervised by the museum.

Kardashian herself addressed the difficulties of being able to wear the dress. She would have had to lose seven kilos to even fit into the historical garment. Despite a strict diet, the dress still didn’t fit. Because the back clasp wouldn’t fully fasten, Kardashian wore a white fur jacket that covered her lower back. This allowed her to pose on the red carpet without revealing the unzipped detail. After the appearance on the red carpet, the original dress was also exchanged for a copy.

In conversation with “VogueKardashian said she was “extremely respectful of the dress and its importance to American history.” I would never sit or eat in that dress.”

Shortly after the performance, restorers and fashion historians became concerned that wearing such a valuable dress would send the wrong message about how historically relevant artefacts were being treated. For example, Madelief Hohé, fashion curator at the Kunstmuseum Den Haag, wrote on Instagram: “In the future, restorers, collectors and curators will again be pressured by powerful and wealthy people to be able to wear clothes from their collections. They see it ‘just as a dress’ and not as irreplaceable cultural objects.”

Even Bob Mackie, who designed the first sketches for the dress, was not pleased. “It was designed for Marilyn Monroe, no one else should have worn that dress,” he told Entertainment Weekly in May.

The web version of Photoshop will soon be free for everyone

The owner of the Nets cracks: “They don’t want you in Golden State, come here! »