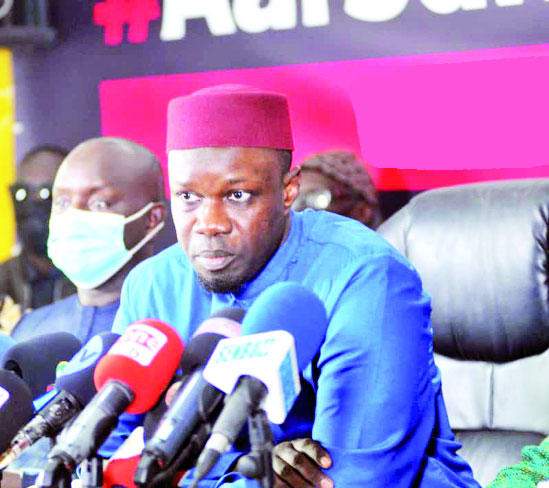 Ousmane Sonko revealed yesterday to have been the subject of “ordered espionage” by Macky Sall. He indicated that on this subject, there were “incidents” yesterday between the police and his security. The leader of Pastef does not recognize the legality of the ad hoc committee and the conclusions of today’s plenary. And therefore, he does not intend to respond to a possible summons from the “weak and not independent” investigating judge.

“Espionage” in front of his home
Ousmane Sonko persists and signs that he is the victim of a “conspiracy hatched by Macky Sall”. The leader of the “patriots” takes as proof the incidents which he reported to the media to explain his delay at the press briefing yesterday. “It is deplorable that Macky Sall deploys our Defense and Security Forces, not to secure the national territory, but to spy on his political opponents. Members of my security had detected a blue van near my house with two gentlemen taking pictures and films of my house. They were arrested this morning. There was an incident between them and my security (…). We discovered electronic and surveillance equipment in the van that is beyond comprehension. During the clashes, objects were left on the spot, which we made note by way of usher. The police deployed a device to try to stop some of the elements of my security by demanding the return of some of the elements ”, detailed Ousmane Sonko.

“Illegal ad hoc committee and illegitimate plenary”
Who hinted that he will not comply with the convocation of justice in the case between him and Adji Sarr. Because, he believes that there are “irregularities”. “At the start of the procedure, as soon as the investigation turned towards the conspiracy, she was stopped. If we had let the commander of the Research Section continue, he would have demanded the name of the famous doctor and the lawyer who intervened that night. This would have clarified the trail of the plot. It was the public prosecutor who asked the gendarmerie to stop the investigation. Immediately, he transferred the case to the examining magistrate of the 8th cabinet, Mamadou Seck, deemed weak and not independent. And I take responsibility for my words, ”he added. In any case, the deputy explains that the referral to the National Assembly did not respect the procedure for lifting his parliamentary immunity. “In his indictment for opening an information, the prosecutor did not dare to quote Ousmane Sonko. The examining magistrate was to look for X. this is the first act of his investigation. He must then listen to the complainant, ask her to confirm her complaint and possibly call witnesses and even summon Ousmane Sonko as a witness. He did not do anything. The judge decided that X is Ousmane Sonko. He again seized the prosecutor to ask him to waive the immunity of Ousmane Sonko. This procedure is null and void, ”insists the leader of Pastef. Sonko declares that he does not recognize the “legality of the ad hoc Commission and its recommendations and the illegitimate plenary of Benno bokk yaakaar”. And, therefore, he insists, “whatever happens tomorrow in their thing, my parliamentary immunity remains intact.” Because, he believes that the ad hoc Committee cannot rule without having access to the elements of the file while the judicial and executive powers have them with them.

Sonko challenges judge Mamadou Seck
“My lawyers asked for the disqualification of Mamadou Seck, this biased judge of the 8th non-independent cabinet of the public prosecutor and the government of Macky Sall. I ask the Senegalese to keep a close eye on the dean of the judges Samba Sall for any possible participation in this file. All the crappy blows against Macky Sall’s opponents go through this triangle in judicial Bermuda: Serigne Bassirou Guèye, Samba Sall and Mamadou Seck. If Macky Sall wants to liquidate me, he will have to get his hands dirty instead of hiding behind his barbs of justice (…) On February 9, the prosecutor receives a report from the gendarmerie and requests the examining magistrate. The same day, the prosecutor seized the Advocate General, who seized the Minister of Justice and the latter seized the President of the Assembly ”, he indicated. Returning to the merits of the case, Ousmane Sonko appreciated the work of the gendarmes in charge of the investigation before denouncing “the interference” of the Chancellery. “The report of the investigation is exculpatory for us as well the testimonies as the medical bulletin. The PV directs towards the track of the plot since the investigation establishes the active intervention of a member of Bby, the coalition of Macky Sall. Just the message from a lawyer with special ties to the Minister of the Interior would have been enough to establish this, ”he said.

See Also:  The coronavirus in Spain: 200 infected and 2 dead