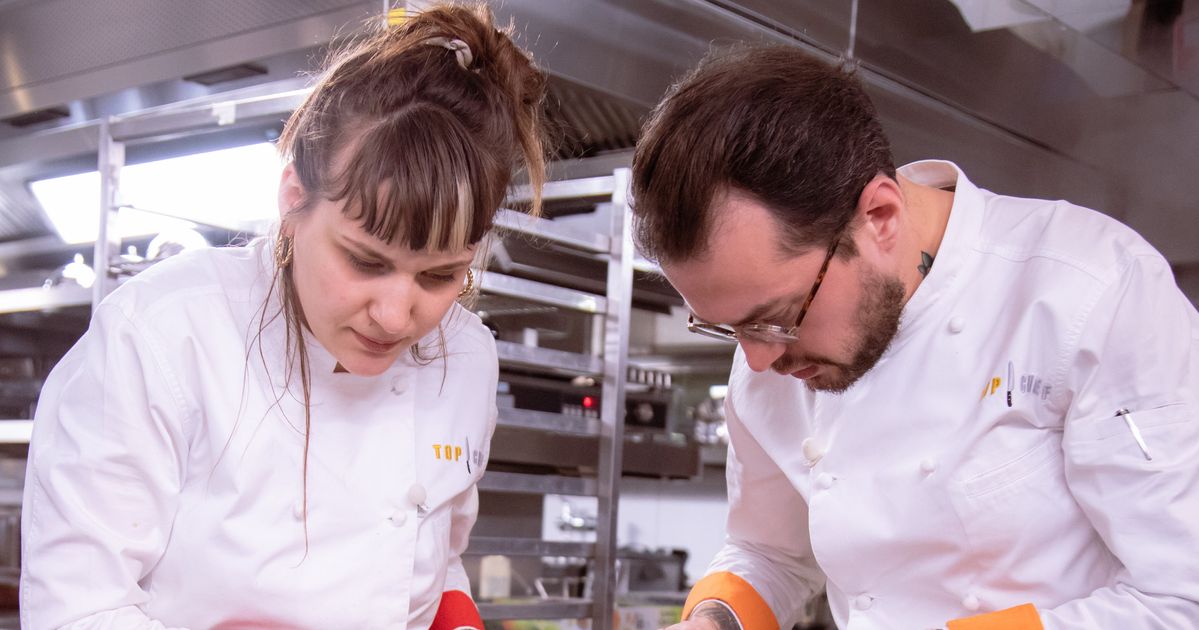 TOP CHEF – We now know the name of Mohamed Cheikh’s successor. The final of the 2022 edition of “Top Chef” ended this Wednesday June 15 on M6.

And at the end of this last duel, it is Louise Bourrat who won the votes of the chefs and who collected, by adding the votes of the guests of the gala dinner, 56.19% of the votes against Arnaud Delvenne. Offering in passing a 3rd consecutive victory to its leader Helene Darroze.

It is in the kitchens of the most starred palace in Europe, the George V in Paris, that Louise in the colors of the red brigade, and Arnaud, in the colors of the orange brigade, had to create a gastronomic menu for some 80 volunteers. of the Red Cross and their ambassador Adriana Karembeu, as well as the four members of the jury: Hélène Darroze, Paul Pairet, Glenn Viel and Philippe Etchebest.

On the program for this final test: 10 hours of cooking to serve a menu with starter, main course and dessert, supported by the return of former candidates from the competition, including Mickael BraureLucie Berthier Gembara, Lilian Douchet, Sébastien Renard and even Pascal Barandoni and Thibaut Spiwack.

For their last menu, here is what the candidates prepared. For Louise, it’s time to highlight the “Japanese fibre” with a starter of fish in sashimi, then a main course with a veal chop, smoked eel and braised lettuce before finishing on a black garlic-miso ice cream, foam mousse and a buckwheat tile. At Arnaud, the starter is a revisited mussel and fries, followed by a chicken waterzooï in yellow wine with a vegetable compote, then candied and frozen apples with speculoos ice cream to finish.

A “horrible” final for Louise

A great victory for the 27-year-old Franco-Portuguese chef who nevertheless spent “one of the worst days of [sa] life” while filming the finale. Because as she told the magazineTele-LeisureLouise suffers from endometriosis, a gynecological disease that affects two million French women, or one woman in ten.

“The day was extremely stressful,” she says. Besides, I was very sick that day. I haven’t slept all night, I had my period, I was at rock bottom because I have endometriosis. I have to take lots of pills during the day. It was very hard.”

Supported by her one-day brigade and even backed up by her opponent Arnaud Delvenne during a streak that reflected the equally commendable career of this unfortunate finalist but with a big heart, Louise Bourrat succeeded that day in delighting the taste buds of the jurors. And to offer, for the third season in a row after Mohamed Cheikh in 2021 and David Gallienne in 2020, a new victory for chef Hélène Darroze.

See also on The HuffPost: The contestants of this season of “Top Chef” left with an indelible memory

Reviews | Honor X7, X8 and X9, the smartphones that seek to deliver more for less

River Plate had several chances to convert, but tied goalless against Colón in Santa Fe