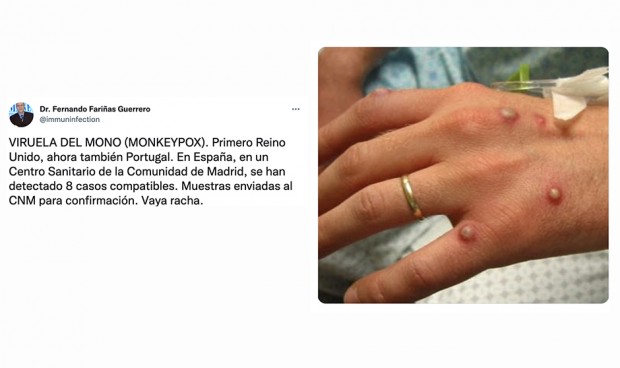 The Ministry of Health and the autonomous communities have launched a health alert after detecting several suspected cases of the monkey pox. The 23 cases detected in men residing in Madrid are pending confirmation by genetic tests carried out at the National Center for Microbiology (CNM). While awaiting the results, the specialists have already begun to share some of the cases they are seeing in their consultations.

Pablo L. Ortiz Romero, professor of dermatology and Head of the Service at the 12 de Octubre University Hospital in Madrid, has shared on his social networks the photograph of a man with obvious signs of monkey pox on your skin, around the genital area. According to the specialist, in one morning — that of May 18 — they have already seen three similar cases and, although they await confirmation of microbiology, they are alert to the situation.

Three cases of #Monkeypox on a morning in @ dermah12o !!! (We still do not have microbiological confirmation)
It’s scary. Very afraid pic.twitter.com/1qmLmXPNge

In response to his publication on social networks, the doctor has received many questions from other professional colleagues who were interested in knowing more details about these three cases, especially if they are related or if they have recently traveled to Africa. According to the dermatologist, the patient reported not having traveled and assured that they are still trying to find out more information about these first three cases.

For his part, Fernando Fariñas Guerrero, from the Institute of Clinical Immunology and Infectious Diseaseslaments on social networks about the “streak” we have had —after suffering the effects of Covid-19 and the hepatitis aguda in children—explaining that monkeypox has been detected in the United Kingdom, Portugal and now Spain with eight cases pending confirmation and samples sent to the National Microbiology Center (CNM). In addition, the specialist attaches a photo with the characteristic sores that causes this skin disease.

MONKEYPOX. First the United Kingdom, now also Portugal. In Spain, in a Health Center of the Community of Madrid, 8 compatible cases have been detected. Samples sent to CNM for confirmation. What a streak. pic.twitter.com/dceaTPrCWf

The doctor Alejandro Macías has answered the tweet of the specialist in Dermatology Hospital 12 de Octubre to explain that “although it is frightening, monkeypox is not considered highly contagious between people; close contact for transmission breathing or contact with body fluids, such as during sexual intercourse.

Although scary, monkeypox is not considered highly contagious between people; close contact is required for respiratory transmission or contact with body fluids, such as during sexual intercourse.

What symptoms does monkeypox have?

Monkeypox is a rare disease diagnosed essentially in remote areas of central and western Africa, near tropical forests, according to data from the World Health Organization (WHO). The virus is usually transmitted after contact with wild animals such as rodents and primates, but has “limited spread” between humans. This virus produces symptoms similar to those seen in smallpox patients in the past, although less severe. During the first five days after infection, the main ones are fever, severe headache, lymphadenopathy (swollen lymph nodes), low back pain, myalgias (muscle pain) and severe asthenia (lack of energy).

In an explanatory thread about this disease, Fernando Fariñas Guerrero recalls that the incubation period for this disease is 10 days and that there is no treatment, although cidofovir could be “potentially useful”. The specialist affirms that the smallpox vaccine could confer protection “up to 85 percent” against this disease.

-There is no treatment, although cidofovir could be potentially useful.
– The smallpox vaccine could confer protection in up to 85% of those vaccinated.

The situation is “extremely difficult” in Donbass pounded by the Russians…