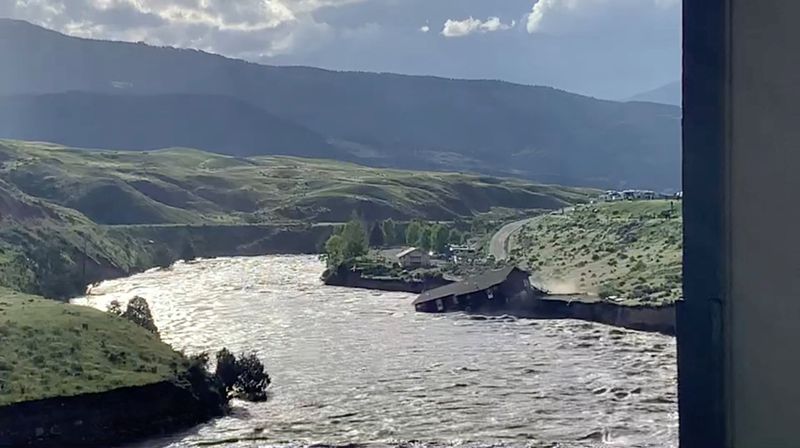 Montana Governor Greg Gianforte has declared a statewide disaster, with rescue and relief operations focusing on three counties after days of record rainfall that caused flooding, mudslides and flooding. unprecedented rockfall in the greater Yellowstone area.

The upheaval followed one of the region’s wettest springs in many years and coincided with a sudden rise in summer temperatures that accelerated the runoff of melting snow from late winter storms in the park’s highlands. .

Record flooding and landslides prompted park officials on Tuesday to close Yellowstone’s five entrances to incoming traffic for the first time since the catastrophic wildfires that ravaged the area in 1988.

Authorities were also scrambling to evacuate visitors stranded in the park, which is expected to remain closed until at least midweek.

No deaths or injuries have been reported, but startling video footage released by NBC News shows an entire riverside home washed away from its foundations in the raging torrent of the Yellowstone River north of the park.

At the request of local law enforcement, the Montana National Guard sent helicopters to assist with search and rescue efforts in the small towns of Roscoe and Cooke City.

Gianforte said in a statement that the recent rapid snowmelt and heavy rains have caused “severe flooding that is destroying homes, washing away roads and bridges, and leaving Montanese without power and water services.”

“I have asked state agencies to contribute their resources to support these communities,” he added.

The only road out of Gardiner, home to around 900 people, including many park staff, was partially cleared on Tuesday after multiple rockslides and washouts isolated the community. Residents and visitors were allowed out, while only deliveries and emergency traffic were allowed in.

Flood waters along the Yellowstone River were nearly a meter higher than their previous records measured more than a century ago, according to the National Weather Service.

Officials were still looking to assess the condition of the roads and bridges that wind through Yellowstone Park and around Yellowstone Lake, North America’s largest alpine lake.

Covering an area of ​​132 square miles, roughly the size of Las Vegas, the lake is fed by more than 141 rivers and streams, its only outlet flowing north into the Yellowstone River.

The winding North Entrance Road between Gardiner and the Mammoth Hot Springs park headquarters in Wyoming has been carved out in several places by floodwaters – washouts that will likely take months to repair.

Many of the communities in Montana hardest hit by the floods depend heavily on summer tourism and were gearing up to celebrate Yellowstone’s 150th anniversary this year. Tourism officials are counting on a recovery from COVID-19 restrictions over the past two summers.

How is healthy eating? Experts answer