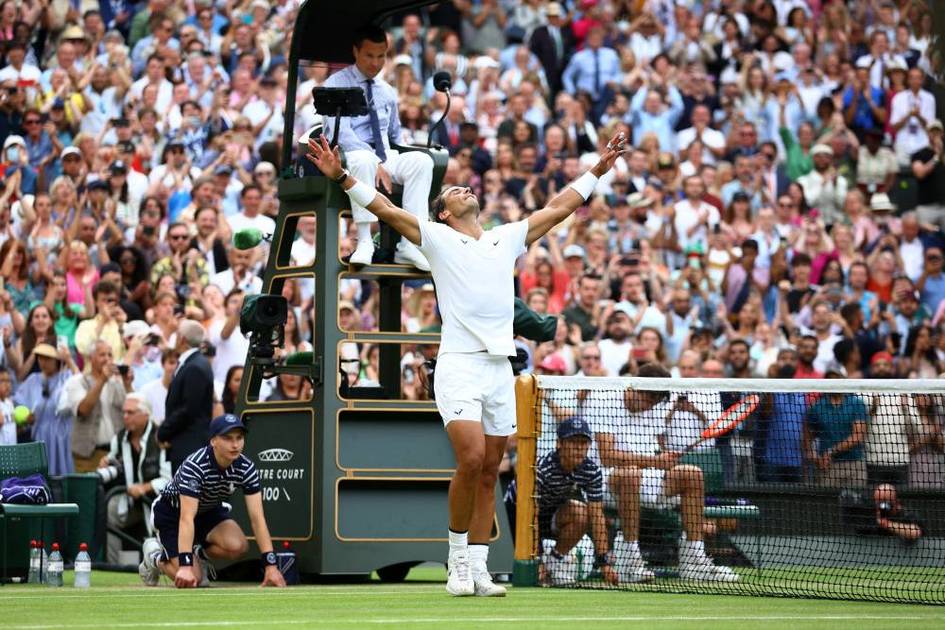 Despite a medical break that raised fears about the possibility of his withdrawal, Spanish fourth-ranked Rafael Nadal overcame his pain and reached the semi-finals of Wimbledon, the third grand slam, by winning the “Super Thai Break” over his American rival Taylor Fritz, to meet the Australian “naughty” Nick Kyrgios, who is playing his first semi-final at the Grand Slam.

Nadal is seeking to win his third consecutive Grand Slam title after winning the Australian Open earlier this year, and then the French Roland Garros last month, raising his yield to 22 major titles.

The Spaniard previously won two Wimbledon titles on grass, in 2008 and 2010.

Nadal started the match strongly, leading 3-1, before falling in five consecutive games to the eleventh seed and thus losing the first set.

The two players exchanged breaks in the second set, but Nadal was not comfortable with his movement, and when he advanced 4-3 he sat in his chair shaking his head and looking at his team.

The Spaniard then went on a medical break, to treat what appeared to be an injury to his abdominal muscles.

After his return, Fritz succeeded in serving, with Nadal continuing to play with an uncomfortable movement.

But the Spaniard held his serve twice comfortably to lead 6-5, and with a backhand stamped the second set in his favour, to the cheers of the crowd.

In the fourth, Nadal equalized the result, and the two headed to a decisive marathon set that reached the “Super Thai Break” after a 6-6 tie, and Nadal settled it 10-4 in his favour.

“For a few moments I thought that I would not be able to finish the match,” the Spaniard said after the match.

“I honestly enjoy playing similar matches in front of you guys. I cannot thank you enough for the support.”

Kyrgios to catch the “ship”

“I never thought I’d be in the semi-finals of a major tournament,” Kyrgios said after the match. I thought the ship would have sailed without me, and I might have missed that little window in my career.”

“I am happy that I was able to come here with my team and put in a good performance. I felt like I was too defensive. Garen is a scary player. I got lucky with my two break points, so I’ll take that and prepare for my next game.”

Kyrgios, who rose to fame when he defeated Nadal in the tournament when he was ranked 144th eight years ago, is the first Australian player to reach the semi-finals at Wimbledon since Lleyton Hewitt in 2005.

Kyrgios entered the match amid a new wave of controversy, as it appears that he will appear in an Australian court next month to be questioned over allegations of assault.

Halep for a third big title

Among the women, Romanian Simona Halep, the former world number one and is currently 18, reached the semi-finals for the third time in her career, defeating Anisimova (25) 6-2 6-4, three years after winning the title on English lawn.

At the age of thirty, Halep is looking for her third major title, knowing that she is crowned in the dirt Roland Garros in 2018, and she meets in the last square the Kazakh Elena Rybakina (23) who defeated Australian Ajla Tomljanovic (44) 4-6, 6-2, 6-3, who reached The semi-finals of the first major tournament of her career.

“It’s nice to be back in the semi-finals,” Halep said.

For her part, Rybakina commented after qualifying for the semi-finals, “It is unreasonable. I am happy that I reached the semi-finals after a difficult match.”

Rybakina was born in Moscow and is currently 23 years old. She became the first player from Kazakhstan for both men and women to reach the semi-finals of the “Grand Slam”.

“I started slowly and my serve wasn’t good at first. Maybe because I was a little nervous.”