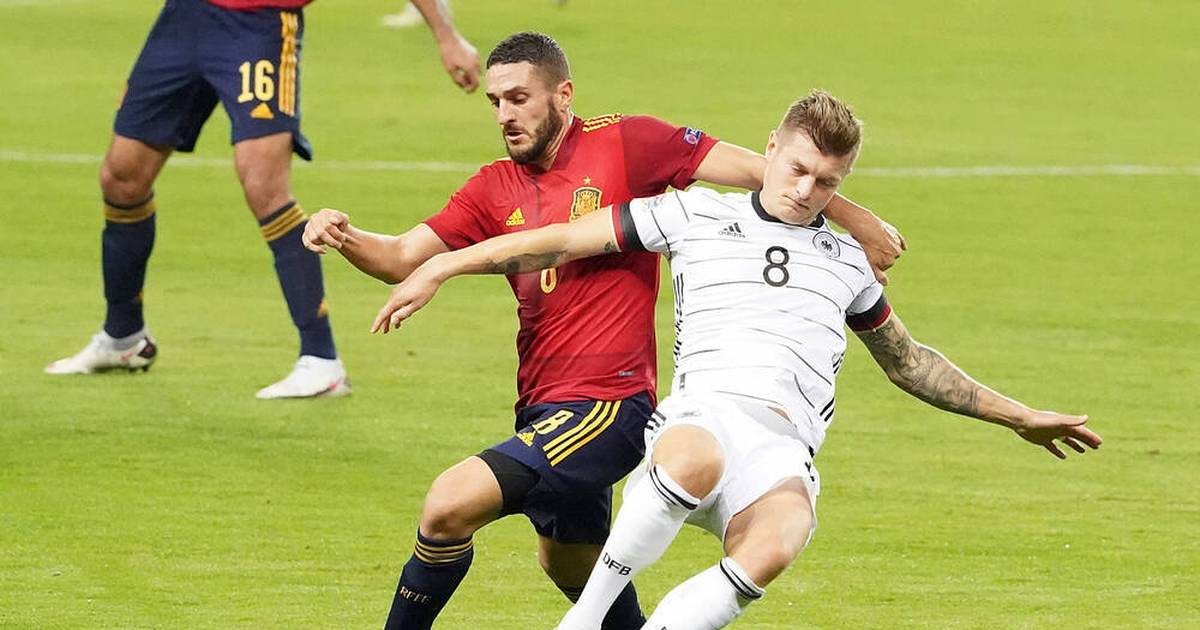 What a smack for the German national team!

The DFB team suffered a 6-0 defeat in the final Nations League game in Seville against Spain and didn’t put a leg on the floor during the 90 minutes. (The game to read in TICKER)

The German team in the SPORT1-Single review:

MATTHIAS GINTER: The calls for Joshua Kimmich will not decrease, because Ginter is not a top level right-back either. Like Max, he had little access to the duels. Leipzig’s Olmo had an easy game. Before 1-0, he put far too little pressure on Koke’s flanker (33rd). Before the 4-0 he let himself overlap at the center line. Ginter practically never took place. SPORT1-Note: 5,5

ROBIN KOCH: The Leeds star found the game well, but then went under with his fellow men. Before the 2-0 he lost the decisive header against Olmo. After a foul on Morata, he got a yellow card (37th). Shaky in the second half and no longer present in the duels. Several times he let himself play dizzy, like in the 85th minute. SPORT1-Note: 5

NIKLAS SÜLE (up to 45): With its quality and its demands, more must come from Süle. In any case, the 25-year-old was not a defensive boss against the Spaniards. At the back he often seemed insecure, but he didn’t provide enough rest on the ball. Complained of knee pain after the Ukraine game. At half time, Löw took off the field. SPORT1-Note: 5,5 (Service: Nations League schedule and results)

PHILIPP MAX: Against strong Spaniards, Max was clearly shown his limits in his third international match. He never got a grip on Torres, and in hardly a duel did he find access. After all, he switched himself in from time to time and crossed twice into the Iberian penalty area. Max was indirectly involved in many goals conceded. SPORT1-Note: 5,5

TONI KROOS: Where was Löw’s veteran against the Spaniards? He could hardly be seen from him in the midfield headquarters at Gündogan’s side. He has a regular place with the national coach, but especially at the debacle in Seville, one could have expected Kroos to lead. But he didn’t. “It hurt. We didn’t get any access defensively,” he said after the final whistle. SPORT1-Note: 6

LEON GORETZKA (until 61): Great against Ukraine, weak against the Spaniards. Goretzka defended himself in some duels and demanded balls. But even he couldn’t turn the tide. SPORT1-Note: 4,5

ILKAY GÜNDOGAN: I was lucky that referee Ekberg didn’t give an early penalty for his unnecessary foul on Olmo (5th). In the 3-0 he came much too late against goal scorer Rodri (38th). Why he had to defend the much bigger ManCity star in the first place remains a mystery to Löw. Before Torres’ 5-0, he did not get into the duel. Even at 6-0 he was far too passive in the penalty area. SPORT1-Note: 5,5 (Service: The tables of the Nations League)

TIMO WERNER (up to 77th): There was no sign of the Chelsea star against the dominant Spaniards. The DFB-Elf was also far too passive and could therefore never stage Werner and his two men next to them. SPORT1-Note: 4,5

SERGE GNABRY: There was little to be seen of Gnabry either, as was the case against the Ukraine. After a single action, he could have served Goretzka, instead he looked for the conclusion himself (14th). In the 1-0 through Morata he let the Juventus striker on the second post in the back too easily, but here too the question: Why did he have to defend against the much bigger Morata? (17.). Crazy: His post crash from 20 meters in the 78th minute was the first DFB shot on goal. SPORT1-Note: 4,5

LEROY SANÉ (until 61): On the right wing he dared at least once in one-on-one duels, but had hardly any penetration. Like against Ukraine, he didn’t play enough defensively. Left the field early, frustrated. SPORT1-Note: 5

JONATHAN TAH (from 46th): Started the game with a loss of the ball, which led to an unused counterattack by Morata (48th). Before 4-0 he went into an alibi duel against template provider Fabian (55th). At 5-0 and 6-0, he just wandered around. SPORT1-Note: 6

FLORIAN NEUHAUS (from 61): In the shame of Seville, Neuhaus played his first competitive game for the German national team. Goretzka left the square for him. Neuhaus resisted, but could not stop the downfall of the DFB. SPORT1-Note: 4

LUCA WALDSCHMDT (from 61): The new Lisbon native came for Sané. He had no scenes. SPORT1-Note: 4,5

BENJAMIN HENRICHS (from 77th): The Leipziger came into the game for Werner, but too late to grade. At 6-0 he was duped on the right side.