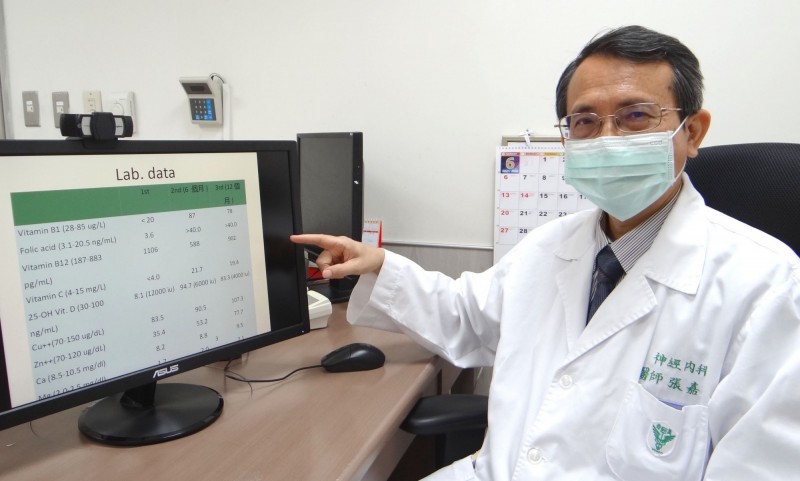 Zhang Jiayou, chief physician of the Department of Neurology of Chimei Hospital (see picture), said that enough nutrients can make the body’s cell metabolism normal. The left side of the figure shows the detected values ​​of micronutrients in elderly Veterans patients. (Provided by Chi Mei Hospital)

[Reporter Wang Junzhong/Tainan Report]A 95-year-old veteran underwent lumbar intervertebral disc surgery 20 years ago. After that, he suffered from lower back pain and foot pain. In the past six months, he had limp and lower extremity edema. Recently, the pain has become so much that he has to rely on wheelchair assistance. I went to Chi Mei Hospital for a physical examination. It was found that there were bleeding spots and black spots in the capillaries of the skin and mucous membranes. It was a vitamin C deficiency. It showed that my uncle’s usual intake of fruits and vegetables was insufficient. Through micronutrient testing, it was found that vitamin B1, C, D and minerals were indeed present. Insufficient substance zinc and magnesium. The medical team gave intravenous nutritional supplements (once a week for 3 weeks), and then continued oral nutritional supplements for 3 months.

After the entire course of treatment, the patient’s lack of nutrients returned to normal or even higher, and the previously abnormal nerve conduction function was also significantly improved. I was in a wheelchair at the first visit. After the assistance of the Chi Mei medical team, the pain gradually improved. I was able to visit relatives 4 times in China. Now I don’t need to walk with crutches.

Jiayou Zhang, the chief physician of the Department of Neurology of Chimei Hospital, pointed out that from the perspective of nutritional medicine, the key to good health is to keep the cells in a normal metabolic state. In addition to enough rest and exercise, it is necessary to give the cells the basic nutrients needed for metabolism. In the past, the main nutritional problem was insufficient calories, but nowadays, the related diseases are uneven or poor nutrition.

According to the survey on the changes in national nutrition and health from 2013 to 2016, the most severely deficient vitamins in Chinese dietary intake are fat-soluble vitamin D and vitamin E; the most serious mineral intake is calcium deficiency, followed by magnesium, zinc and iron. , Sodium intake is too high. At present, the status of serum vitamins and serum minerals in Chinese people, if the prevalence of deficiency and marginal deficiency is used to assess the situation of Chinese people’s vitamin D deficiency from the viewpoint of preventive medicine, the proportion of males aged 13 to 44 and over 45 years old is nearly 60% and 60% respectively. 40%; women are as high as 80% and 60% respectively. The problem of uneven nutrition among Chinese people is worthy of attention.

Zhang Jiayou said that since September 2018, the precision medical laboratory of the clinical pathology department of Chi Mei Hospital has developed “micronutrient” screening tests for this purpose, integrating the personal micronutrients jointly developed by physicians, clinical pathology department, nutrition department and health examination center. Chemical medicine helps Chinese people who have troubled their lives for a long time because of a certain element deficiency or deficiency, but can’t find the answer to their health problems. Through adequate intervention of nutrients, symptoms can be improved.