Alberto asked to recover the salaries, during an automotive inauguration

Eternal homage: the Carlovich Trinche has a huge mural on the west side 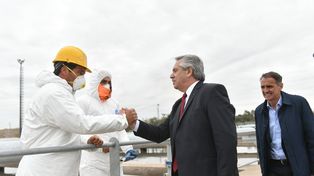 In a direct message to the FdT, Fernández asked that they accompany him

Coronavirus: this Saturday the vaccination continues in Portal Shopping

They developed in Barcelona the first antibody capable of blocking metastasis

Days, times and channels: the details of this weekend’s sports agenda

“On behalf of the Cantero”, the ruse used to assault the Canalla Bubble of Arroyito

Crime in Biedma at 2500: the prosecutor stated that “the victim had no possibility of defense”

Animal Day: how much does it cost to keep a pet in Rosario

Suspicions about a triple crime: they believe that the author injected air into the victims

Video: violent fight between parents in front of a Belgrano neighborhood school