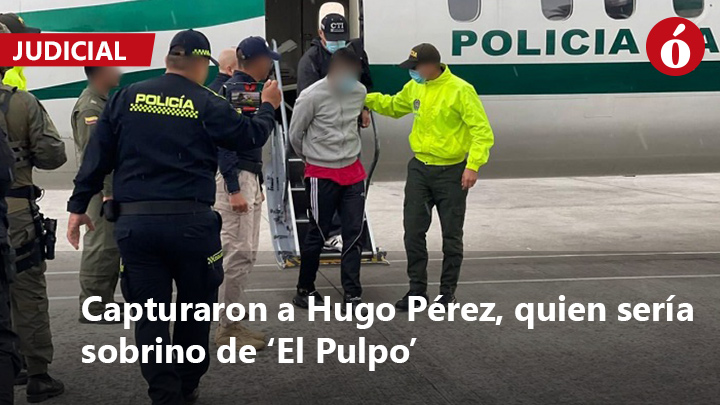 In a stealthy way, the authorities continue to affect the tentacles of the drug trafficking empire that would have consolidated the extinct Luis Enrique Pérez Mogollón, known as ‘El Pulpo’, who was shot to death on the night of April 3, 2012, in a restaurant located on Los Libertadores avenue.

If you want to have unlimited access to all the information of La Opinión, support us by clicking here: http://bit.ly/SuscripcionesLaOpinion

Three days ago, Police units that arrived from Bogotá captured Hugo Pérez, who would be the nephew of ‘El Pulpo’, as well as Ciro Fernando Muñoz Soto, who had already been arrested in 2021 by the Sijín, for belonging to a micro-trafficking structure and also Jhonatan Rodríguez.

A judicial source unofficially assured that, presumably, these people would be exporting cocaine and they would be members of the network of ‘narcos’ known as ‘Los Pulpos’.

Also read: She stopped to buy some cakes and a hitman killed her with two shots

Likewise, that this operation was carried out in coordination with the DEA of the United States, for allegedly being accused of conspiring to send cocaine to the North American country, therefore, those captured will be requested in extradition.

The raids were sudden in the capital of Norte de Santander and as it was known, the detainees would have been transferred to Bogotá.

However, until the closing of this edition, the authorities had not officially ruled on this operation that hits the finances of the drug trafficking network in this border area.

“The only thing that is known is that they are ‘heavyweights’ and that the operation would have been carried out simultaneously in other cities. And they did it stealthily, because it is already known that information leaks in Cúcuta,” said a judicial source.

In May 2018 he was also captured Ronald Andres Mogollon Gonzalez, ‘RM’, Luis Pérez’s nephew, designated to be his successor and the coordinator for the money laundering of the drug trafficking network in Norte de Santander, with routes to Central America, Puerto Rico, the Dominican Republic and Venezuela.

According to the authorities, Mogollón González led networks of Venezuelan and Dominican citizens in Santo Domingo (Dominican Republic), to create front companies with international bank accounts, in order to carry out million-dollar transactions from Mexico to Colombia.

Also read: The ‘perfect plan’ to assassinate a well-known toy merchant from Cúcuta

In three months the authorities identified bank transfers for more than 2 million dollars.

As it became known, Ronald settled in the Dominican Republic since 2016. Since then, the authorities of that country began to follow his trail.

In February 2018, they seized $504,000 in cash, which would presumably be used to pay local drug traffickers.

The trace of the business

While Luis Enrique Pérez Mogollón was alive, no national or international authority could prove his links to the world of drug trafficking. Not even the accusations made in September 2008 by former president Álvaro Uribe Vélez about this enigmatic businessman from Cucuta, produced any results among the investigative organizations.

Six years and five days after his murder, the Criminal Investigation and Interpol Directorate of the National Police (Dijín) confirmed that Pérez Mogollón yes he was a drug dealer of great power in Cúcuta and the Colombian-Venezuelan border, which managed to build an economic empire, not only in Norte de Santander, but in other cities of Colombia.

A high command of the Dijín explained at that moment that, before his death, it was very difficult to prove anything to him, because his tentacles reached all levels and every time they opened a process or tracked him down, he was informed and quickly became frustrated. any action against you.

“In life, this man had six investigations in the Prosecutor’s Office, but strangely they all ended. It was very difficult to take any action against this man, even if it was done from Bogotá. They really kept him very well informed and, in addition, his movements were very well directed to stop any process, ”said the judicial source.

Thank you for evaluating La Opinion Digital. Subscribe and enjoy all the content and benefits at: http://bit.ly/SuscripcionesLaOpinion

‘The return of the witches 2’ (2022), review: An exercise in well-understood nostalgia on Disney Plus with a leading trio that casts a spell on anyone

what impact on political stability in West Africa?