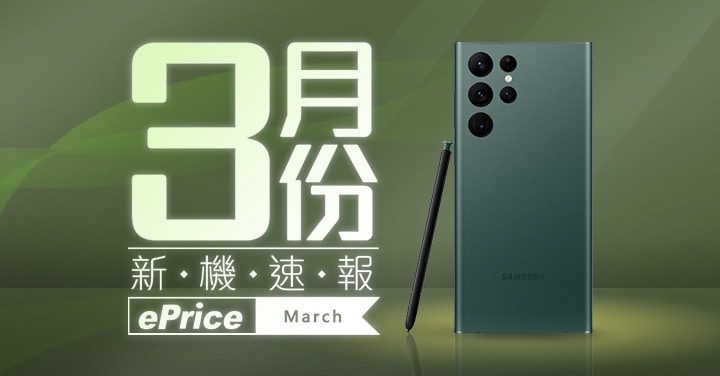 2022 doesn’t feel like a long time coming, and in the blink of an eye, the first season is already entering its final month. Although the mobile communication event in the first half of each year: MWC will be held at the end of February, there may be more new products released by then; but in March, there are also some flagship mobile phones that everyone can buy. Do you like it? ? Come and see.

In February, Samsung officially released its flagship mobile phone for the first half of this year: the Samsung Galaxy S22 series. There are three models: S22, S22+ and S22 Ultra. I believe that friends who are concerned about mobile phone news should already know it. Samsung has also previously held a pre-order event for the S22 series, which is expected to be launched on March 4, with the price starting from 24,990 yuan; and the pre-order of the S22 series is also quite enthusiastic, and the S22 Ultra has been pre-ordered within a few hours.

The biggest change of the S22 series this year is the S22 Ultra, which combines the high-end cameras of the S series with the appearance and functions of the Note series into a single model. The S Pen is directly built into the mobile phone, and no longer has to be purchased separately like the previous generation. And it’s not easy to store. The S22 Ultra also has breakthroughs in specifications, including the use of Qualcomm S8G1 processor, 6.8-inch 1-120Hz dynamic refresh rate screen, 108MP quad-lens main camera, and even the writing delay time of S Pen is also greatly reduced; It’s also more washable and features stronger Gorilla Glass Victus+ glass and Armor aluminum alloy.

The other two S22 and S22+ also use Gorilla Glass Victus+ glass and Armor aluminum alloy to increase the strength of the mobile phone; the mobile phone is also equipped with the S8G1 flagship processor, and the screen is slightly smaller than the S22 Ultra, so that consumers who like small mobile phones have more multiple choice. In addition, both models are also equipped with a 120Hz dynamic refresh rate screen, and also support IP68 waterproof and dustproof.

In addition to the Samsung S22, realme, which has been quite active in the Taiwan market recently, will also launch a new GT flagship series in March: realme GT 2 Pro, following the realme 9 Pro/Pro+ in February. This mobile phone was released in the Chinese market in early January. It uses the Qualcomm S8G1 processor, and in order to enhance heat dissipation, a large heat dissipation system and diamond-containing heat dissipation gel are used. In addition, the phone uses an LTPO AMOLED panel covered with Corning Gorilla Victus glass. The 6.7-inch QHD+ screen supports a dynamic refresh rate of 1~120Hz, and is rated by DisplayMate A+. It has stereo speakers that support Dolby Atmos.

The realme GT 2 Pro has a triple-camera system, the main camera uses a 50-megapixel Sony IMX 766 sensor with optical anti-shake, the new ProLight super-sensing technology provides stronger night shots with lower noise, 50 million pixels The ultra-wide-angle camera has the world’s first 150° field of view and is equipped with a microscope lens with 40x magnification; when recording, it supports AI night scene, blur and UIS Max video anti-shake. The realme GT 2 Pro is equipped with a 5,000mAh capacity battery and supports 65W fast charging. It can fully charge the phone in 33 minutes and weighs only 189 grams.