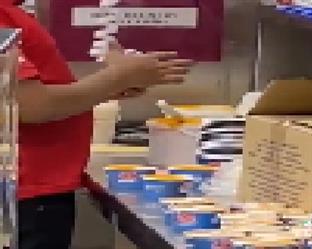 A circulating video clip of one of the workers in a famous restaurant sparked controversy after he appeared to be packing a food product in a way that violates health requirements and precautionary measures.

The circulating clip documented the worker using his hand directly without gloves, and not wearing a muzzle, which sparked criticism from many individuals who demanded the company responsible for this restaurant to take the necessary action regarding the incident.

The company responded to the circulating clip that what happened is an individual act and does not represent in any way the level of cleanliness, service and precautionary measures that it follows in all its sectors.

Let’s live hidden: should we be wary of Chinese smartphones?