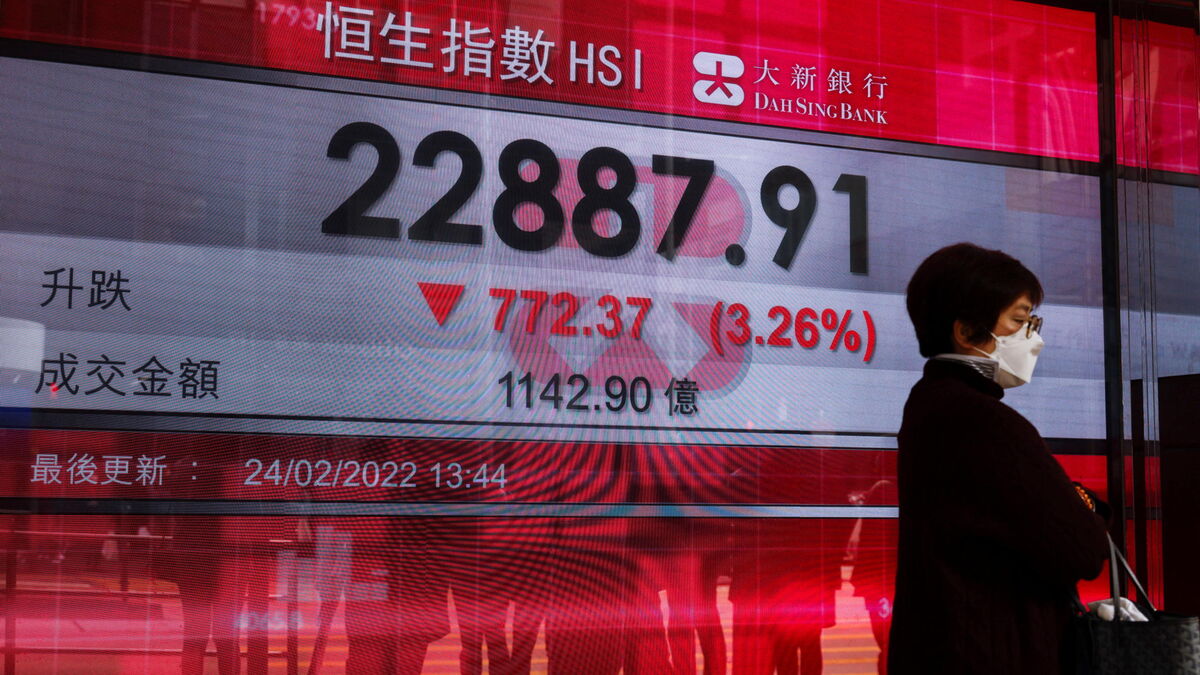 World stock markets have been yo-yoing in recent days to the rhythm of announcements concerning Ukraine. They fell this Thursday morning, a few hours after the announcement by Vladimir Putin of a military intervention in Ukraine, followed by bombings all over the country. The flagship index of the Paris Stock Exchange, the CAC 40, plunged at the opening of 4.19%.

All European indices are in the red. Frankfurt fell by 4.39%, London by 2.55%. The Eurostoxx 50, the benchmark European index, fell by 3.52%. When the Omicron variant was discovered at the end of November, global stock markets had already fallen. The CAC 40 had sunk 4.75%, establishing its worst session since the stock market panic of March 2020.

The Tokyo Stock Exchange, which closed at 7 a.m. French time, ended sharply lower. The flagship Nikkei index in Tokyo lost 1.81%, posting its fifth consecutive session of decline and reaching a closing low since November 2020. The broader Topix index fell 1.25%. On the Hong Kong Stock Exchange, the Hang Seng index fell more than 3% before its close at 9 a.m.

Panic and fall of the ruble in Russia

The Moscow Stock Exchange reopened after a temporary suspension. Shortly before 9 am, the Moex index (in rubles) showed a drop of more than 30%. The RTS index (in dollars) plunged him by more than 34%. Early this Thursday, the Russian Central Bank announced that it was starting “interventions” in the foreign exchange market in order to “stabilize the situation” after the fall of the rouble. At 5:42 a.m. French time, the ruble hit a low of 90 rubles to the dollar, a first in its history, down 9.02% from the previous day’s close. Shortly before 9 a.m., the drop was just over 7%.

Cryptocurrencies, very volatile, also experienced a sharp drop in prices after Vladimir Putin’s announcement and the bombings. Bitcoin fell below $35,000 (which hadn’t been seen since last July), falling almost 5% in one day. Ether fell almost 8%.

The price of oil on the rise

Faced with stock markets falling into the red, oil is rising sharply. The price of Brent, the benchmark for the price in Europe, reached up to 103 dollars, the highest since 2014, the year of the annexation of Crimea by Russia, up 6% in one day (at 8:30 a.m. ). The barrel was at 102 dollars around 9 a.m. This rise in the price of oil could have an impact on the price at the pump.

Oil is not the only one concerned by the rise in prices. Wheat took more than 9% on Thursday compared to the previous day, marking an increase of more than 20% since the beginning of the year.

From Emmanuel Macron to NATO, the main reactions to the Russian “military operation”

After the bombing of Ukraine, cryptocurrencies are collapsing and Bitcoin is falling to this level