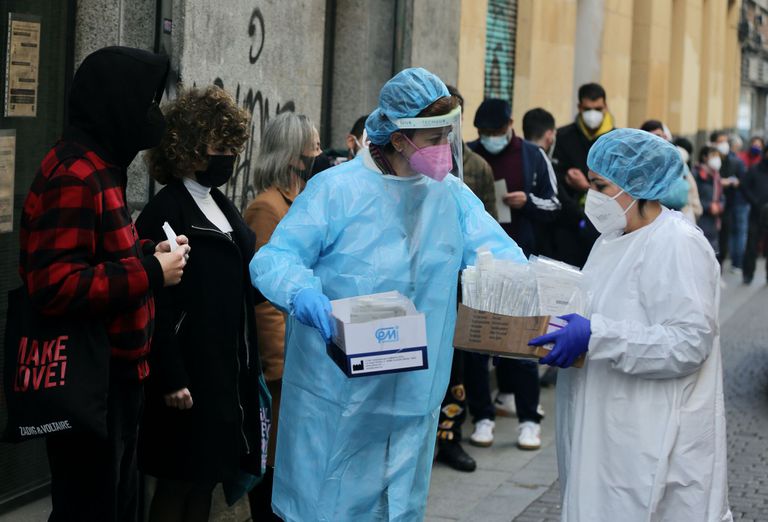 LONDON.- Politicians and some public health experts from Britain, France, Spain and other countries from all over Europe they are promoting a new approach to the pandemic, a little out of audacity and a little out of resignation given the evidence that covid is already part of everyday life.

Governments want to take advantage of this moment of predominance of the omicron strain, which causes milder Covid symptoms, and also that in some countries the number of infections began to fall after several weeks of record growth. So They have already begun to change their pandemic containment policies to get out of the “emergency” mode.

In Spain, for example, Prime Minister Pedro Sánchez declared last week that citizens “will have to learn to live with the coronavirus, just as they live with other viruses,” and said that his country should align its approach to Covid with the way how it handles seasonal flu outbreaks. Olivier Véran, the French health minister, recently said that high levels of contagion and strong vaccination rates in France “perhaps” make this the last wave of the pandemic.

The change comes despite the World Health Organization (WHO) warning this week that the coronavirus should not be tackled like seasonal flu. and that it is too early to make a decision like that: there is still much we do not know about this disease, the WHO said. In addition, the rise in cases of the omicron variant is still hitting the continent, and much of the world’s population remains vulnerable to the disease due to low vaccination rates in many countries, which increases the chances that new variants will emerge. .

Still, proponents of the “learn to live with coronavirus” strategy point out that the latest surge in cases is very different from the first waves., among other things, because a large part of the population of Western Europe is vaccinated, and the hospitalization rate is much lower.

Those changes include shorter isolation periods and the removal of the pre-departure testing requirement for people traveling to England, because the omicron variant was already so prevalent that testing did little to contain its spread.

There are some concrete signs that Britain may be turning the corner on the pandemic. On Friday, 99,652 new cases were reported, a sharp drop compared to the 178,250 cases reported on the same day last week.

Peter English, a consultant for the control of infectious diseases, says that most health workers and scientists in Britain are no longer discussing restrictions, but rather common sense prevention measures. Now those experts are promoting the mandatory use of a mask in public places and new regulations for the ventilation standards of closed spaces.

“At the time there was a debate about the ‘covid zero’ strategy and trying to eradicate the virus through restrictions, but I think that discussion is lost,” says English. “Because we have allowed the virus to spread so much, it will be very, very difficult to put the genie back in the bottle.”

From that perspective, “We are going to have to live with an endemic virus, but be careful, because endemic does not mean it is not serious”, says the expert, and warns about the danger of simply “learning to live with the virus” without taking preventive measures.

In England, the most worrying thing was the intense pressure that the virus was putting on the National Health Service (NHS), but that fear has begun to fade.

In Spain, they are creating a new monitoring system that will come into force as soon as the current increase in cases subsides, and the country also recently relaxed its isolation protocols. But pressure from the Spanish government for the omicron variant to be considered a flu has been criticized by some doctors and professional associations, as well as by the European Medicines Agency, who say the virus continues to behave in a pandemic.

In France, the incidence of new cases continues to rise, with an average of 300,000 new cases per day during this week, almost six times more than a month ago. But President Emmanuel Macron, who faces a presidential election in April, opted to keep restrictions minimal and focused on encouraging the French to get vaccinated.

Germany took several weeks longer than some of its European neighbors to see the spike in infections: It reported 80,430 new cases on Tuesday, breaking the record set in November. But while everyone agrees cases will continue to rise, independent scientific experts advising the German government have not advised new restrictions.

Christian Drosten, the country’s most famous virologist, pointed out that Germany will most likely have to start treating the virus as an endemic pathogen.

“Let’s say we don’t have to open the door all the way, but in some areas we do have to open up to the virus a little bit,” he said last week in a podcast interview.

Italy is also facing some of the highest daily infection rates since the start of the pandemic. But in recent weeks it has tightened restrictions and made the vaccine mandatory for everyone over 50 years of age, as well as a health pass to be able to use public transport.

A health ministry spokesman said Italy was still “in a delicate phase” and recent increases in daily cases continued to put pressure on intensive care units. In general, Italian scientists agree that it is too early to consider the situation endemic, although they believe that perhaps the time has come to “start thinking about the new normal” that implies living with the virussays Fabrizio Pregliasco, a virus expert at the University of Milan.

The same caution is expressed by a wide range of health professionals and researchers across Europe, some of whom published a text in The British Medical Journal to demand better coordination in dealing with the pandemic. There they argue that it is still urgent to “reduce infections to avoid overflowing health systems and protect social and economic life.”

“Even in the most optimistic scenarios, letting the omicron variant circulate freely without restriction can have devastating consequences,” the experts wrote.

By winning the Supercup with Real, Marcelo equals a prestigious record

They detect a new “major eruption” in the Tonga volcano | World