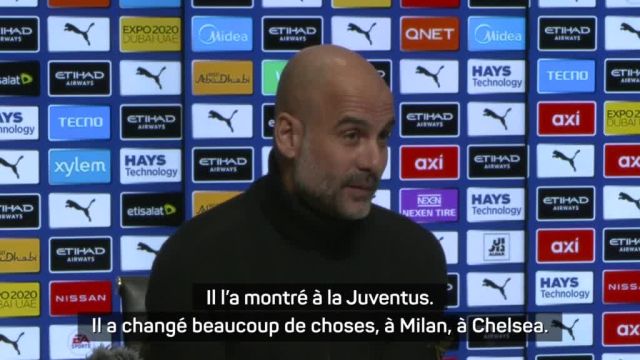 After having almost secured their place in the quarterfinals of the Champions League by winning (5-0) at Sporting Portugal on Tuesday, Pep Guardiola’s men want to confirm their nine-point lead over Liverpool, against the Londoners, who remain out of three losses in a row. In a press conference, Pep Guardiola said all the good he thought of Antonio Conte, who had previously called him a “best coach in the world”.

“I would say that I have no words (to describe it). I learn a lot by watching his teams, the movements. The club relies on him 100%, giving him time and applying his ideassaid the Catalan technician admiringly. He showed it at Juventus. He changed a lot of things, at Milan, at Chelsea. If the club relies on him 100%, he will be successful. In my first season, it was difficult in terms of results. Coaches need time and investment to be around for a long time and to be successful, especially in this country. He can talk about it, I can talk about it, we know how tough this country is… It’s tougher here than anywhere in the world. I have incredible respect for the fact that when I watch his teams, I feel like I’m learning something new and I can improve. »

Pasión de gavilanes 2 online via Telemundo: date, time and how to watch the premiere of season 2 | Colombian soap operas | FAME