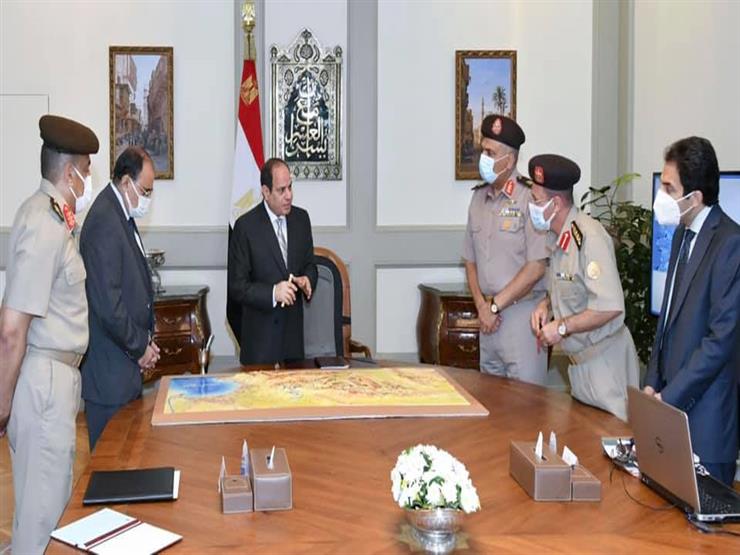 The official spokesman for the Presidency of the Republic stated that the meeting dealt with following up the construction and engineering position of a number of projects of the Engineering Authority at the level of the Republic, especially the new administrative capital and its residential neighborhoods and facilities, foremost of which are the engineering designs for the People’s Square, the various international schools, and the city of stables for horses, which will represent a part Mainly from the Egypt International Olympic Games City, as well as the new headquarters of the Stock Exchange.

The general plan of the “International Motor City” and its yards and exhibitions was also presented, and the president directed that the city be integrated with services, to include shops, workshops for spare parts, administrative buildings, banks, and real estate offices.
The meeting also dealt with the presentation of the construction and executive position of the city of Galala with its various components, including the city’s investment zone, as well as the roads and axes leading to it.

The plan to establish a “City of Gold”, which will represent an integrated city for gold industry and trade in Egypt, was also followed up, in addition to providing industry and production requirements, high-end exhibitions, and training workers to hone their capabilities, reflecting Egypt’s ancient civilized history in this delicate craft industry.

In this context, the President directed to provide the Dabaa axis with all the necessary services along the road, in addition to expanding the road to become 8 traffic lanes from both directions, including the service road, so that the Dabaa axis integrates with the giant national project “Delta Egypt” for agricultural production, which is located south of the road. And that as a main artery serving the project.

The President also directed to widen the main entrance to the Cairo-Suez Desert Road under the “Moshir Abu Ghazaleh” bridge to avoid the recently observed traffic congestion in this area.