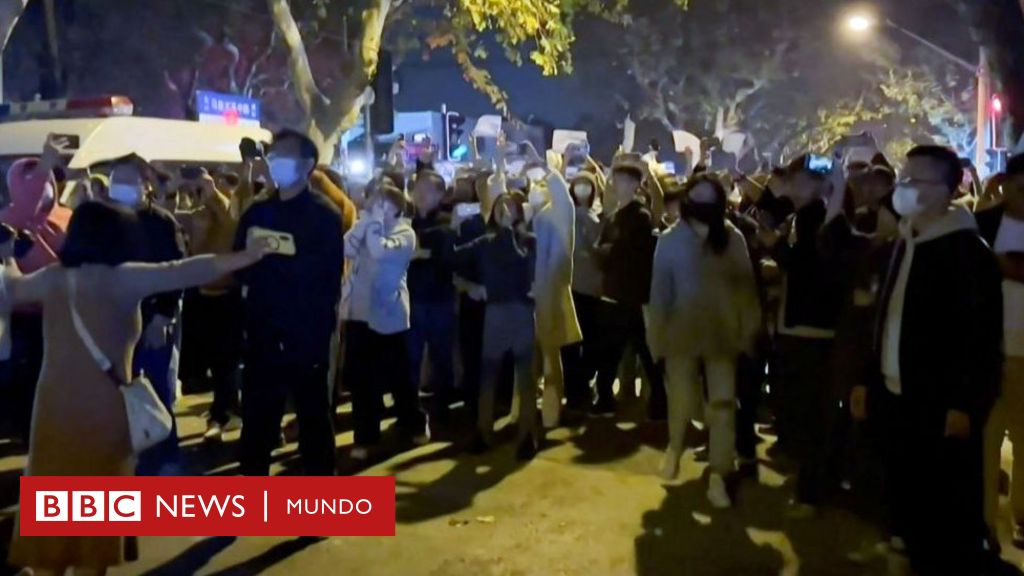 Protests against the restrictions by the covid in China intensified on Saturday, following a fire that killed 10 people in an apartment block in Urumqi, capital of the Xinjiang Uyghur autonomous region, in the west of the country.

Thousands of people took to the streets of Shanghai to remember the victims and demonstrate against the restrictions. Many of those present demanded the resignation of the president Xi Jinping.

The BBC saw at least three people being taken away in police cars.

Many point to confinement in buildings as the cause of deaths in the fire.

While Chinese authorities deny that was the cause, Urumqi officials issued a rare apology late Friday, pledging to “restore order” by phasing out restrictions.

At the protest in Shanghai, China’s largest city and world financial center, some people were seen lighting candles and leaving flowers for the victims.

These kinds of lawsuits are unusual in China, where any direct criticism of the government and the president can result in harsh sanctions.

One protester told the BBC he was “shocked and excited” to see people out on the streets, saying that it was the first time he had seen large-scale dissent in China.

He also said the lockdowns had made him feel “sad, angry and hopeless” and left him unable to see his sick mother, who was undergoing cancer treatment.

Another protester explained to the BBC that the police officers were asked how they felt about the protests and the answer was “Like you”. But, she said, “they wear their uniforms, so they’re doing their job.”

Others recounted acts of violence, with one protester telling the AP news agency that one of his friends had been beaten by police at the scene, while two others had been pepper-sprayed.

Although the situation in the area had calmed down by Sunday morning, the BBC saw an increased police presence in the protest area, with several dozen police officers, private security guards and plainclothes police on the streets.

Elsewhere, at several Chinese universities, photos and videos of students protesting Saturday night surfaced online. The largest crowd seemed to be at the Nanjing University of Communications.

Videos of the protests are difficult to independently verify, but many of them show a unusually explicit and open criticism the government and its leader.

The Urumqi fire was a nightmare scenario for many Chinese who have found themselves under widespread restrictions in recent months, locked in their apartments with no way to escape, according to some accounts.

Authorities have disputed these claims, but this has not stopped public outrage and anxiety from spreading.

The incident has become the latest tipping point in growing frustration. Millions are tired of tthree years of movement restrictions y daily tests of covid.

The anger has spread to every corner of China, from major cities to remote regions like Xinjiang and Tibet, and has galvanized all sectors of society, including young university students, factory workers and citizens. common.

As this anger grows, protests against covid measures have become increasingly common. But even the demonstrations this weekend are unusual in this new normal, both in their number and in the frankness of his criticism of the government and President Xi Jinping.

Taking to the streets en masse with hundreds of people calling for President Xi’s resignation was thought unthinkable not long ago.

But after a recent dramatic protest on a Beijing bridge that shocked many, a precedent appears to have been set for the expression of a more open and sharp dissidence.

Others have also chosen to wave the Chinese flag and sing the national anthem, whose lyrics uphold revolutionary ideals and urge the people to “rise up, rise up.”

It’s a show of patriotism that could also be read as an expression of solidarity with fellow Chinese who are suffering under Xi’s zero covid policy, and a call to action.

The protests are the latest in a sped-up series of demonstrations against China’s Covid-zero measures that have also grown increasingly bold in their criticism of the government and President Xi.

The zero covid strategy is the latest policy of its kind among the world’s major economies and is due in part to the relatively low vaccination levels of China and the effort to protect the elderly.

Last-minute lockdowns have sparked anger across the country, and broader covid restrictions have sparked recent violent protests from Zhengzhou to Guangzhou.

Despite strict measures, the number of cases in China this week reached historical records since the pandemic began.

Low medical salaries and lack of shifts: the main lack of public health is management

Mother and daughter steal items for €1,900 from Shopping Cora stores in Rocourt