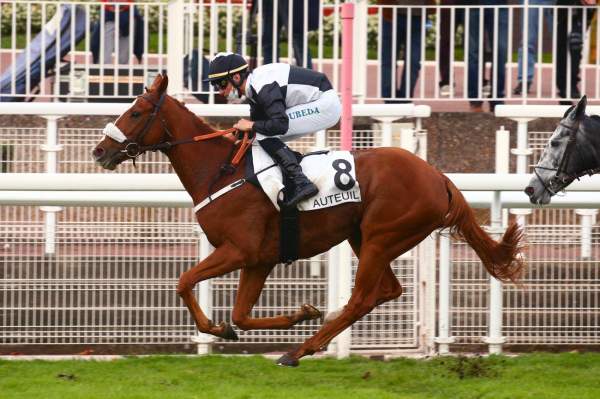 Quinté + Sunday at Auteuil with a handicap over hurdles (ref. +10), over 3600 meters, for all 4-year-old foals and fillies. The ground is announced sticky (4.4) by France Galop. PANDORO (our photo), which remains on three good outings at Auteuil, will be very prominent.

10 PANDORO : Net winner on October 22 of a handicap on the course that interests us, he then finished fourth in the quinté of November 15, over 3900 meters. There is steady progress since the beginning of fall. This resident of the clever Fançois-Marie Cottin still seems able to stand out.

13 DEVIL D’AUTEUIL : Shaped in the province, he proved in his last two attempts that he could excel in such handicaps in Auteuil. In value 54, this regular boarder Thierry poché also deserves great credit.

6 GINGER MINT : Sixth of the quinté of October 22 at Auteuil, over 3600 meters, and fifth of that of November 15, still at Auteuil but over 3900 meters, this very perfectible resident of Nicolas Williams has in this lot a beautiful playing card.

1 KERFANY : This son of Martaline, trained by Gabriel Leenders, had run twice in 2019, each time at Auteuil, revealing interesting means. For his comeback, on November 1 after more than eighteen months of absence, he won with a short head over the hurdles of Compiègne, on very heavy ground. Top-weight under 72 kilos for his first handicap, he deserves some credit.

9 MANX : After his easy victory on September 9 in a handicap over the hurdles at Auteuil, he was deemed worthy to run at Group III level twice. It will be less difficult for him in this event. It should be very wary of it.

5 RED ARROW : Ninth of a quinté on the hurdles of Auteuil on September 22, this resident of Dominique Bressou surely imposed on October 11 in another handicap, on the course which interests us. It’s a little back to school for her on Sunday, but the freshness advantage can also be an advantage.

11 MAY FLOWER : This other resident of Dominique Bressou is in constant progress as evidenced by his second place on October 28 in a handicap on this course. He is an attractive outsider.

2 GALANT DU CHENET : Presented by Guillaume Macaire, this son of Martaline remains on two steeplechase outings, the most recent of which (3rd in a handicap at Compiègne) is not bad. He had won over the hurdles at Auteuil on February 24 on heavy ground. Despite a heavy weight, he is not out of the game.

.In case of non-runner : 8 POLIGONE

Moment of madness
11 – MAY FLOWER

We discuss here the Ze5-Event of the day contested in this big handicap for 4 years, over hurdles and on the course of 3,600 meters.

How about trying a poker game? Kerfany will certainly approach this category for the first time and has only three races on the clock, but it is obviously making great progress and remains on a victorious return to Compiègne. The fact that he carries the heaviest weight right off the bat here intrigues us a lot and prompts us to place him at the top of this not-so-steep lot.

We expected better from Betong Emery the last times and he will be taken back in confidence judged on what he has achieved best, leading the opposition with Pandoro, in great shape and placed at this level lately, and Manx which fell back to category after two unsuccessful attempts in groups III.

Red Arrow, is also progressing, and has just won against the females on this course in an interesting style and will be retained in good rank afterwards with Ginger Mint who animated the discussions for a long time last and does not have a big margin, even if she could still miss a race that day, and Mayflower, having started well in this category at the end of October. Out of steeplechase, Galant du Chênet represents a possibility for places at the end of the combination.

The Prix Jean Laumain did not retain a sufficient number of starters, the handicap Prix ​​d’Amiens (6th race) has been selected for pay-per-view betting. In shape and confirmed at this level, PANDORO will have our preference.

Find all the BetClic predictions for the day of Sunday, November 29, 2020