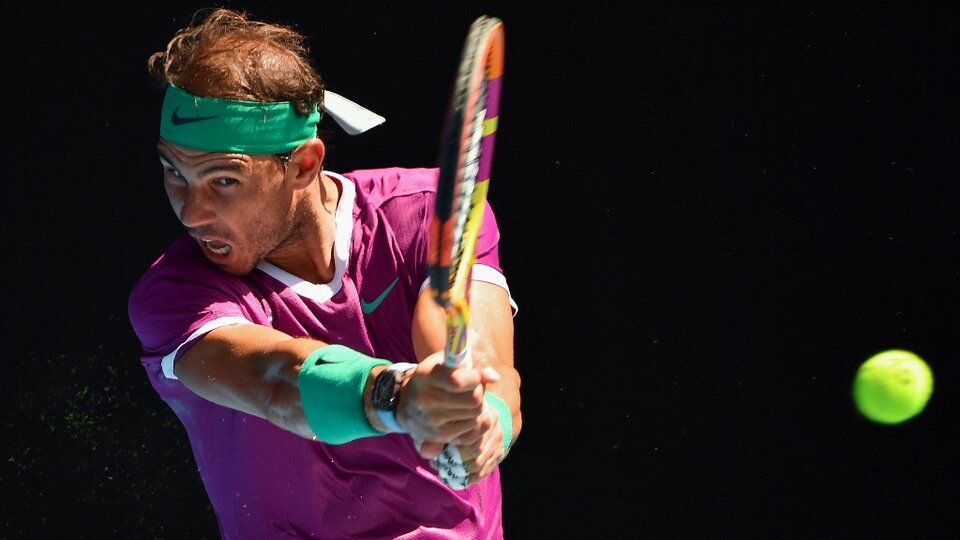 The Spanish Rafael Nadal he beat Frenchman Adrian Mannarino in straight sets and qualified for the quarterfinals of the Australian Open, instance in which he will face the Canadian Denis Shapovalov, who gave the bump by beating the German Alexander Zverev, third favorite of the tournament.

Nadal, number 5 in the world, remains unstoppable in Melbourne, where he only gave up one set so far -in his third round match against Russian Karen Khachanov-. This Sunday, after surviving a marathon tie break of 28 minutes in the first set, he won 7-6 (14), 6-2, 6-2 against Mannarino (69th).

“I was a bit lucky at the end of the tie break, I had my chances but then he had a lot too,” he admitted. the 35-year-old left-hander, who aspires to get his 21st title in Grand Slam tournaments to break away from the record he shares with the Serbian Novak Djokovic and the Swiss Roger Federer.

Nadal, champion 2009 in Australia, avoided facing the German Zverev (3º), who fell to Shapovalov (14th) 6-3, 7-6 (5), 6-3. “I came to Australia with the goal of winning the tournament and eventually become number one in the world. But if I play like that, I don’t deserve it. It is as simple as that”, the German assumed with self-criticism after his defeat.

The Spanish former number one in the ranking won the Canadian three of the four matches they played on the ATP circuit: in the 2018 and 2021 Masters 1000 Rome and in the 2019 Davis Cup finals. He only lost in the 2017 Canadian Masters.

Meanwhile, the French Gael Monfils (17º), executioner of Argentine Federico Coria in the first round, also advanced to the quarterfinals after win 7-5, 7-6 (4), 6-3 against Serbian Miomir Kecmanovic (77th), which ended the plan to “avenge” his compatriot Djokovic after his deportation from Australia for not being vaccinated against covid-19.

Monfils, who equaled his best historical performance in Melbourne (2016), will seek the semifinals against the Italian Matteo Berrettii (7th), who defeated the Spanish Pablo Carreño Busta (19th) by 7-5, 7-6 (4) and 6-4.

among women, the Australian Ashleigh Barty (1st) and the Czech Barbora Krejcikova (4th) They continue on their way after respectively eliminating American Amanda Anisimova (60th) 6-4, 6-3 and Belarusian Victoria Azarenka (25th) 6-2, 6-2.

Barty, who seeks to win the Grand Slam of her country for the first time, will have the American as her rival in the quarterfinals Jessica Pegula (21º), winner of the Greek Maria Sakkari (5th) 7-6 (0) and 6-3; while Krejcikova, current Roland Garros champion, will face the American Madison Keys (51º), who fired the Spanish Paula Badosa (8th) 6-3, 6-1.

This Monday, from 00.00 (Argentine time), the Russian Daniil Medvedev, number 2 in the ranking and top favorite among men in Australia, will seek his passage to the quarterfinals against the American Maxime Cressy (70th). Simultaneously, Canadian Felix Auger-Aliassime (9th) will do the same against Croatian veteran Marin Cilic (27th).

From 5, for his part, the Greek Stefanos Tsitsipas (4th) will go against the American Taylor Fritz (20th).

Later, at 7, Belarusian Aryna Sabalenka (2nd) will face the Estonian Kaia Kanepi (115th) to advance to the quarterfinals.

These are schedules scheduled by the organization of the tournament, which can be run according to the duration of the matches.

“It’s going all over the place!”: Benoit Poelvoorde, François Damiens and Edouard Baer freewheeling in “C to You” (VIDEO)