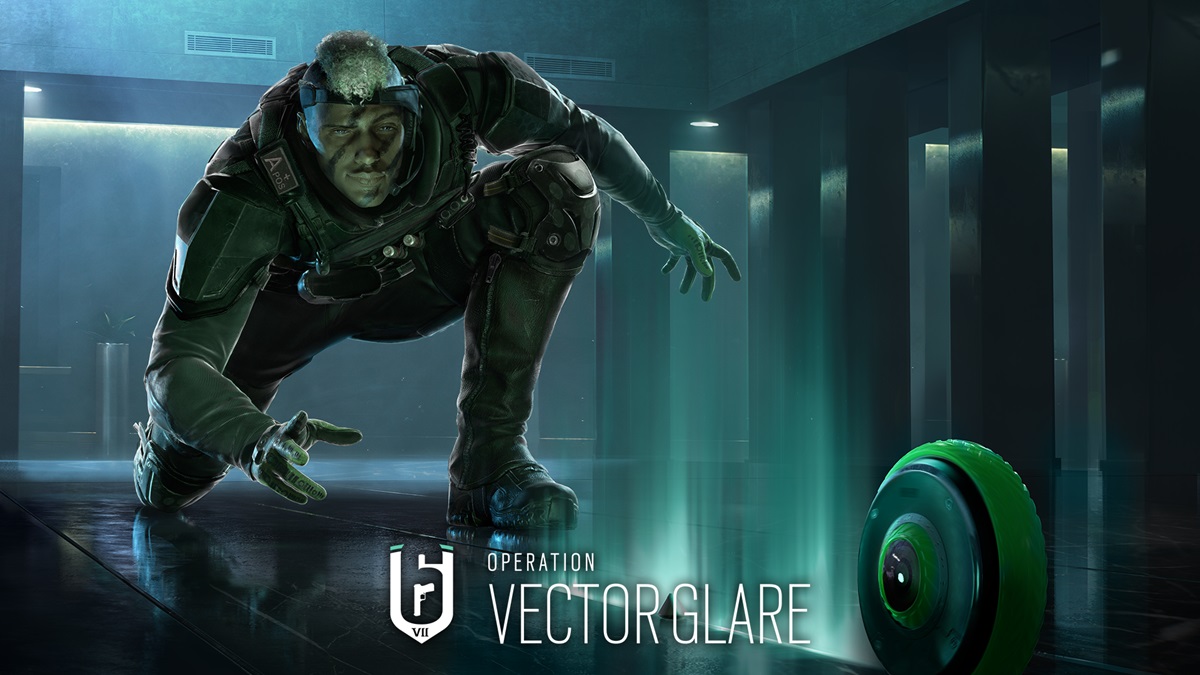 Ubisoft announced on May 22, local time, “Rainbow Six SiegeAt Six Charlotte Major 2022, the world championship of the game, details of YEAR7 Season 2 “Operation Vector Glare” (hereinafter referred to as “VECTOR GLARE”), which is the new season of the game, were announced. In “VECTOR GLARE”, new elements such as attacking operator SENS, map “close combat” for deathmatch, shooting range where you can try shooting weapons, and various changes to improve the comfort of gameplay will be added.

With the implementation on the test server just around the corner, I was given the opportunity to play “VECTOR GLARE” in advance from Ubisoft. Let’s introduce the first impression after actually touching the new season. Please note that some information may differ from the one at the time of implementation on the live server because it includes the information of the test server before it is open to the public.

The new operator, SENS, is an attacking operator from Belgium. The main gadget I own is the “ROU Projector System” (hereinafter referred to as “ROU”). I have three. A throw-type gadget that rolls straight from a grounded location and deploys a curtain-like hologram in its orbit that blocks visibility.

ROU rolls 13m in a straight line and unfolds a hologram. The hologram remains in place for 13 seconds and can block the other person’s view. Compared to existing smoke grenades and gas grenades, it has a wider range of obstruction and is an unprecedented type of gadget. It will work effectively in assembling entries and set play.

In addition, the ROU bounces off and continues to unfold when it hits a wall. Therefore, it has the characteristics of being able to be thrown into gaps in barricades, drone entrances (so-called “drone holes”), and gaps in steel frames. It’s a gadget that feels that research can increase its value. For example, as shown in the image below, it is possible to hide all the rays passing from the kitchen side and support the entry from the living side by flowing the ROU indoors from the drone entrance of the dining room of the mountain lodge.

ROU seems to have high potential, but of course, countermeasures on the defense side are prepared. As mentioned above, since ROU is a throwing type gadget, it will be destroyed if it enters the range of JÄGER’s ADS, and it will be attracted to WAMAI’s MAG-NET (when ROU invades within the range of MAG-NET, MAG- It is sucked into NET and redeploys from there). Also, if you use a bulletproof camera, WARDEN’s glance smart glasses, and MAESTRO’s Evil Eye, you can see the other side through the hologram. The reaction of MUTE’s signal disruptor is a bit special, and although it cannot stop the rolling of the ROU, the hologram is not expanded within the range of the disruptor, and the curtain is opened only there.

SENS is an operator who is expected to play a role as a supporter because it has a speed of 1, the new weapon POF-9 has a low DPS as an attacking weapon, and ROU is a gadget suitable for set play. it is conceivable that. Like the defense operator AZAMI that appeared last season, I have a gadget that can dramatically increase its value depending on how it is used, so please unlock it, research it, and use it as soon as possible.

In the new season, the e-sports scene of “Rainbow Six Siege” will undergo major changes, and new operators will be available in the professional league immediately after implementation. It’s a good idea to take a look at the play of professional gamers who are research demons and steal how to use SENS from there. As an example of watching games, the domestic league “Rainbow Six Japan League“and so on.

In the new season, a map “close combat” dedicated to deathmatch, which is a game mode that appeared last season, will be added. Whereas the traditional “Rainbow Six Siege” map was designed for set play at the base, “close combat” is designed for more dynamic shootouts. The multi-story structure connected by multiple stairs, destructible floors and walls, etc., “Siege-ness” is alive and well, and players who like this mode are likely to be able to lead a more fulfilling deathmatch life.

In addition, the map pool of Deathmatch will be changed along with the addition of new maps. In addition to the favela villa theme park, emerald planes, coastlines, skyscrapers, and close quarters will be added.

It can be said that the fans have been waiting for it. A shooting training ground will be added from “VECTOR GLARE”. The shooting range, accessible from the learning area with situations and tutorials, is a mode where you can try out the weapons of all operators, including unlocked operators.

In addition to practicing recoil control, you can also check the headline corresponding to standing / crouching / lying down and measure the damage of each weapon. The author tried to verify the damage of SMOKE shotguns by distance, part, and attachment. If the distance is within 10m and the laser site is equipped, it seems that the expected value to defeat the opponent with one shot is high.

Together with the training ground that has existed since the release of “Rainbow Six Siege” and the Deathmatch mentioned above, this work will have three different practice modes. Beginners can learn the gun fight of this work step by step, such as trying shooting a gun at the shooting training field, learning character control at the training field, and experiencing practical shooting at death match. It became so.

In the context of “enrichment of content for beginners”, the main feature of “VECTOR GLARE” is probably the operator guide. An operator guide that allows you to check how to use the gadgets owned by each operator will be added as a new element in the in-game “operator” column where you can set the equipment and appearance, view the biography, etc. In the image below, you can see a video showing an overview of the main gadget, heat charge, how many you have, and how to use it, referring to THERMITE’s operator guide.

This operator guide can be called even during gameplay, so you can rest assured if, for example, “I chose it as a trial, but what can this operator do?” In the operator guide, in addition to the main gadget, you can check how to use elements that will lead to improvement if you know to enjoy “Rainbow Six Siege” such as sub gadgets, drones, rappelling, reinforcement, barricades, so you can fully check it. I want you to utilize it.

In addition to the new elements introduced so far, various changes will be implemented in “VECTOR GLARE”. Here, we will pick up and introduce some of them.

First, some operators have made adjustments. Many adjustment points are the return of sub-weapons lost by the operator when implementing GONNE-6, for example DOKKAEBI can now be equipped with C75 AUTO again.

In addition, it is worth mentioning that the specification of GLAZ has changed from speed 2 to speed 3, and BEARING 9 has been added to the sub weapon. A further tailwind for GLAZ, whose mobility and succession capabilities have been amplified by this, is the marriage with ROU, the gadget of the new operator SENS mentioned above. As you may have already noticed, GLAZ’s main gadget, Flipsite, can see through the ROU hologram. The combination of SENS and GLAZ allows the attacker to unilaterally push an unreasonable line of sight onto the defender. As an operator with a little habit, GLAZ, which has been loved but hasn’t had a chance to be used, may return to the position of “Tier 1” operator for the first time in a while.

In addition, Phase 1 of the player evaluation system that has been announced before will be implemented. In Phase 1, the Reverse Friendly Fire (RFF), which suppresses intentional friendly fire, has been enhanced to warn friendly fire addicts. If that doesn’t work, the user will always have RFF running for a period of time.

And, although not directly related to play, the story of the rainbow unit, which is a special unit that appears in “Rainbow Six Siege,” has begun to move rapidly this year.

A cinematic trailer released at the beginning of YEAR7 Season 1 suggested that some members of the Rainbow squad were sharing a sword with Harry and acting as a night haven. And this time, it seems that “Wolf Guard” was born as the third force. The members are operators with gadgets that do not have killing ability such as DOC, MONTAGNE, CLASH, BANDIT. Details such as the background of the launch of Wolf Guard and the relationship with the rainbow unit have not been clarified yet, but it may be interesting to pay attention to the back story in the future.

Although it is a personal story, the reason why I started “Rainbow Six Siege” is the longing for special forces and the backbone of the members who are moderately talked about. I am very much looking forward to what kind of story will be spun in the future.

Finally, the Squad Up Reactivation Program is provided as an incentive for returning users. You can earn rewards by collecting 4 users who have not played “Rainbow Six Siege” since entering YEAR7 and playing 5 games at a party of 5 people. It seems that various rewards are available, such as getting the right to unlock YEAR 4 and his 5 additional operators. Take the opportunity of the Squad Up Reactivation Program to reach out to your old friends.

So far, I have introduced the outline of the new season “VECTOR GLARE”, although it is a rush. In addition to the addition of powerful new operators that are worth researching, we are also improving the game environment such as shooting training grounds and operator guides. “VECTOR GLARE” is likely to be an update that symbolizes “Rainbow Six Siege”, which is about to continue to evolve and grow in its seventh year. Whether you haven’t done it yet or haven’t done it for a while, please take this opportunity to dive into the world of “Rainbow Six Siege,” a tactical FPS with a unique personality.

An investigation is underway!