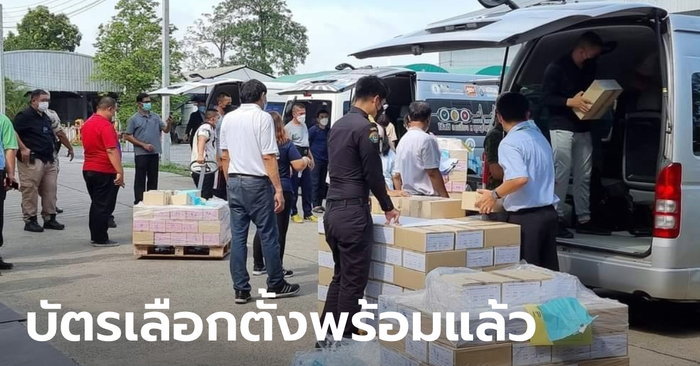 50 districts accepting cardselected governorBangkok Metropolitan Administration and SorKhor. already To be stored in a safe and sealed place. before handing over to the polling station committee On Election Day, 22 May 2022

Today (12 May) Mr. Khajit Chatchavanich, Permanent Secretary of Bangkok as director of local elections in Bangkok (Director of Pol.T.O.T., Bangkok) revealed today that Mr. Supot Lachamsin, Director of the Office of Administrative Affairs and Registration, has been assigned as secretary of the Bangkok Election Coordination Center with the Board of Directors carry out card deliveryelected governorBangkok government and members of the Bangkok Council from the Territorial Defense Volunteer Printing House, Department of Provincial Administration, Pathum Thani Province, and delivered to the committee to receive ballots in all 50 administrative districts.

In the process of card delivery, there will be a committee to check. and follow up on card storage maintenance Stay in a secure, enclosed space before a special symbol is stamped for use in upcoming elections only.

As for the district office A covered van or pickup truck will be used for the transportation of ballots. in order to prevent the ballot from being lost or wet in the rain while traveling or during a car break The ballot received from the ballot acceptance committee is kept in a safe place. and proceeded to stamp on the ballot paper and sign on the ballot cover according to the order of the director of the Election Commission of Thailand. Appointing an officer to stamp on the ballot of the district office and assign the signatories to the cover of the ballot by having security personnel throughout the period of ballot keeping before handing over to the polling station committee On Election Day, 22 May 2022

These 4 constellations will meet with a good friend and confidant next month.

symptoms and treatments of a disease that affects millions of people