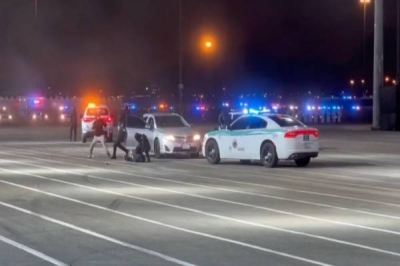 Al-Marsad newspaper: A video clip documented the ceremony of reviewing the participating Hajj security forces this year, in the presence of the Minister of Interior and Chairman of the Supreme Hajj Committee Prince Abdulaziz bin Saud.

The video showed that the ceremony begins with the playing of the royal anthem, then the recitation of verses from the Noble Qur’an, and then the military parade of the Hajj security forces, which includes a number of modern mechanisms participating in the Hajj mission.

In the video, a hypothesis appeared to raid one of the private vehicles and arrest a number of violators, and by searching it, forged documents and a white weapon were found inside. The seizures and those arrested were handed over to the competent authority.

While the video was monitored, the hypothesis of confronting a number of armed persons tried to undermine one of the personalities who came to one of the facilities to hold a meeting.

And the video showed, the Special Forces of the Diplomatic Security confront them until the person and those with him are evacuated from the building.

journey of a ready-to-wear genius