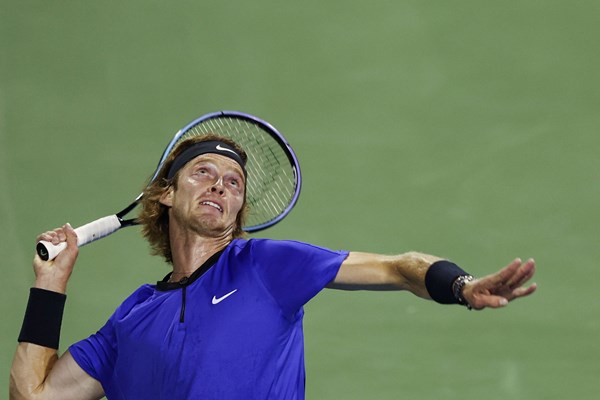 Washington (AFP)
Russian Andrey Rublev, ranked eighth in the world, won two matches in one day, to reach the semi-finals of the Washington Tennis Tournament.
On Thursday evening, rain prevented Rublev’s match against American Maxime Cressi from being held, and it was postponed until Friday.
Rublev, the first seed in the tournament, overcame Chrissy by defeating him 6-4, 7-6 (10-8) in one hour and 42 minutes on Friday, before entering the quarter-final match a few hours later and beating the other American Jeffrey “Jay Jay” Wolf, the participant With a wild card, he is ranked 99th in the world 6-2 and 6-3 in 78 minutes.
“I didn’t stay long on the pitch, that was a key key for me,” Rublev said.
Rublev seeks to win his twelfth title in his career and fourth this year, after winning the Dubai, Marseille and Belgrade tournaments, equaling the number of Spanish titles Carlos Alcaras and Rafael Nadal this year.
Rublev will meet Japan’s Yoshihito Nishioka in the semi-finals, who defeated Britain’s Daniel Evans 7-6 (7-5), 4-6, 7-5, in a marathon match that lasted 3 hours and 35 minutes.
The Japanese has one title in his career, when he was crowned champion of the 2018 Shenzhen Games.
On the other hand, Australian Nick Kyrgios, who reached the Wimbledon final and lost to Serbian Novak Djokovic, hit 35 aces, on his way to defeating American Francis Tiafoe 6-7 (5-7), 7-6 (14-12), 6-2, In a match that lasted for two and a half hours and ended at one o’clock in the afternoon.
In the women’s matches, two Grand Slam champions were eliminated by the loss of Belarusian Victoria Azaranka, the two-time Australian Open champion, with a harsh result against the little-known Chinese Wang Jiyu 1-6, 3-6.
The Chinese ranked 95th in the world, reached the first semi-final of her career during the Valencia tournament last June.
On the other hand, British Emma Radokano, champion of Flushing Meadows last year, fell to Russian Lyudmila Samsonova 6-7 (6-8), 1-6.

“It’s too scary…” A mysterious sign with a spooky picture Who is for what? I asked the management group the truth: J-CAST News[Full text]