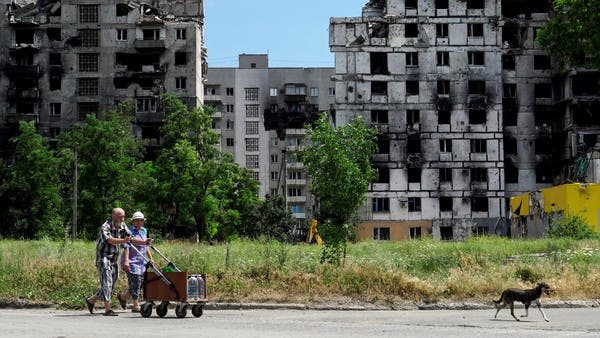 Today, Saturday, the Russian army continues to strike the positions of the Ukrainian forces and military infrastructure within his military operation Which was launched on the 24th of last February, while Ukraine continues to receive material and moral support Military equipment of the Western powers.

In the latest developments, the “Kyiv Independent” website reported that the Russian authorities began issuing passports in the breakaway region of Donetsk. According to the sources, the operation has so far begun in two locations for residents of this area in the Donbass region.

Fighting continues around Lysechansk, the last major city not yet captured by the Russians, in the Lugansk region, one of two Donbass industrial districts that Moscow seeks to fully control.

In the field, the mayor of the Ukrainian city of Mykolaiv, Oleksandr Senkevich, said in a post on social media that strong explosions were heard in the city in the early hours of Saturday morning.

“There are strong explosions in the city! Stay in the shelters,” he wrote on Telegram. Sirens sounded throughout the Mykolaiv region before the explosions.

In the past 24 hours, high-precision weapons of the Russian Aerospace Forces destroyed 2 command posts and 5 ammunition depots in the areas of the villages of Ivano-Dreyvka and Seversk in the Donetsk People’s Republic, Belogorovka in the Lugansk People’s Republic, Nikolayev and Lebetykha in the Nikolaev region, as well as the areas of concentration of personnel and military equipment of the Ukrainian army In 26 regions, according to Russian media. As announced by the Russian Ministry of Defense, Control of an oil refinery in Lyschansk.

In other developments, 18 people were killed, 30 others were injured, including childrenin a Russian air strike targeting an apartment building in the Odessa region in southern Ukraine.

A spokesman for the military administration in the Odessa region, Sergey Prachuk, said that the missile was launched by a “strategic aircraft” from the sky over the Black Sea. According to the spokesman, “the missile hit a nine-storey apartment building, located in the Belgorod-Dniester region,” about 80 km south of Odessa.

This comes as the Ukrainian army accused the Russians, on Friday, By firing phosphorous bombs on Serpent Island in the Black Sea Which Ukrainian forces regained control of the Russian army Thursday.

On Thursday, the Russian army announced that it withdrew from this strategic island “in a goodwill gesture” after “completing the set goals.”

Kyiv published a video clip showing a plane flying over Serpent Island and dropping at least two bombs that hit their target. This is followed by the rise of white tongues in the air indicating the use of phosphorous bombs.

Phosphorous bombs are incendiary weapons that are prohibited from being used against civilians, but not against military targets, according to a law signed in 1980 in Geneva.

Kyiv has repeatedly accused Moscow of using these weapons since the end of February, even against civilians, which the Russian army has categorically denied.

On Thursday, the Ukrainian army praised the “liberation of a strategic area” after the announcement Thursday morning of the withdrawal of Moscow’s forces from the Serpent Island in the Black Sea occupied since the first days of the Russian invasion.