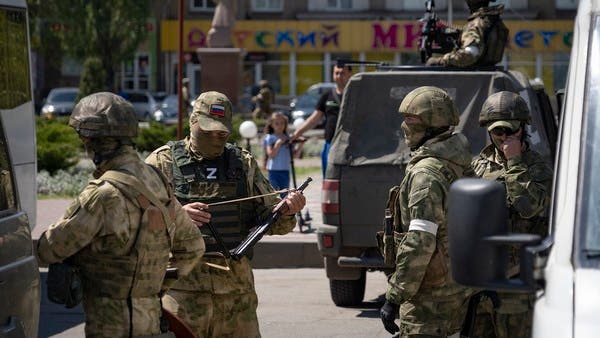 The Russian military operation in Ukraine enters, on Saturday, its 87th day, and after Full Russian control of the Azovstal plant in MariupolRussian artillery heavily bombed the Donbass region in the north, while the Ukrainian News Agency reported that Russian artillery was shelling the Sumy region in northeastern Ukraine.

And the “Interfax” news agency quoted the Russian army as saying that it had destroyed a large Western arms shipment in the Ukrainian Zhytomyr region, west of Kyiv, using “Kalibr” missiles launched from the sea. “The long-range and high-precision Kalibr missiles destroyed a large shipment of weapons and military equipment sent by the United States and European countries near the Malin railway station in the Zhytomyr region,” the ministry said.

Russia is focusing its military efforts in the east and south of the country. In particular, Moscow seeks to fully control Donbass, which has been under the control of pro-Russian separatists since 2014.

For its part, the British Ministry of Defense said that Russia’s loss of drones at a heavy rate will weaken its reconnaissance capabilities, noting that the sanctions have reflected on Russia’s ability to produce more reconnaissance marches.

The General Staff of the Ukrainian forces said on Facebook on Saturday morning that the Russian army “continues to launch attacks in the eastern zone of operations to impose complete control over the territories of the Donetsk and Lugansk regions and to maintain a land corridor with the temporarily occupied Crimea.”

The last group of Ukrainian troops surrendered It was holed up in Azovstal, ending a siege that lasted for weeks.

Nearly 1,000 Ukrainian soldiers, who had been hiding in the factory for weeks, left their posts and surrendered to Russian forces and pro-Russian separatists, according to the Russian Defense Ministry.

What will happen next for the evacuated Azovstal fighters is not clear. Ukraine is calling for a prisoner exchange, but some voices in Russia are calling for their prosecution.

President Volodymyr Zelensky said after the evacuation from the factory began that Ukraine needed its heroes to survive, and that work would continue to bring them home.

While Russian President Vladimir Putin said that the soldiers will be treated in line with relevant international laws.

The Azov Battalion, whose members were among those evacuees from Azovstal, is the most common target of Russia, which claims to be fighting the Nazis in Ukraine. The battalion, formed from volunteers in 2014, is now a unit of the National Guard.

For its part, the International Committee of the Red Cross indicated in a statement that the Geneva Convention requires the warring parties to grant them “full access” to prisoners of war “wherever they are held.”

The battle for control of Mariupol was punctuated by massive Western accusations of war crimes.

Ukraine has opened more than 12,000 war crimes investigations since the start of the Russian invasion of its territory on February 24, according to the Ukrainian Prosecutor’s Office.

On Friday, Russian Sergeant Vadim Shishimarin, 21, admitted that he had killed an unarmed civilian at the beginning of the Russian operation, as part of the first trial of a Russian soldier accused of committing a war crime since the conflict began. A verdict in this case is expected on Monday.

The young soldier expressed his “deep regret”, but his lawyer considered him “not guilty” of the premeditated murder charge in his closing pleading.

For his part, Russian Defense Minister Sergei Shoigu stressed that the occupation of the Lugansk region, which together with Donetsk constitutes the Donbass region, is “close to completion.”

In the eastern city of Lasova, at least 8 people, including a child, were injured in a Russian missile attack on a cultural center that was reconstructed a short time ago, according to Ukrainian officials.

And Russian strikes left 12 people dead and 40 wounded Thursday in Severodonetsk in the Lugansk region (east).

Severodonetsk and Lysichansk constitute the last pocket of Ukrainian resistance in the Lugansk region.

The Russians are currently besieging these two areas, which are separated by a river, and bombarding them ceaselessly to exhaust the resistance and prevent the arrival of reinforcements.

While negotiations a few weeks ago mediated by Turkey reached a dead end, Italy indicated on Friday that it had proposed the formation of an “international facilitation group that includes international organizations such as the United Nations, the European Union and the Organization for Security and Cooperation in Europe.”

A strong comeback for the Golden State Warriors

In the presence of Al-Kazemi.. Iraq bids farewell to Muzaffar Al-Nawab at an official and popular funeral