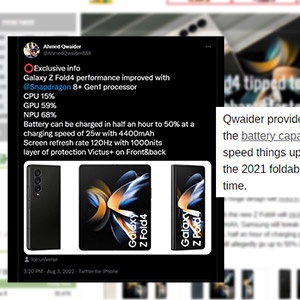 The specifications he registered are the core processor and battery charging specifications of the Galaxy Z Fold 4, as well as information about display brightness and tempered glass. %, GPU can provide 59% and NPU 68% performance improvement.

Ahmed Qwaider claims that the screen brightness and refresh rate support 120Hz at 1000 nits, and the Victus Plus, which is more durable than Corning Gorilla Glass Victus, is used as the front and back covers.