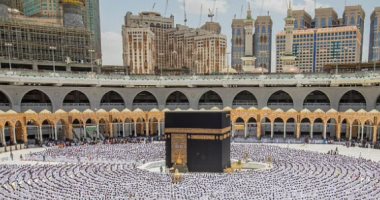 This decision came in view of the weather fluctuations that different regions and locations in the Kingdom are witnessing these days, as the open Eid chapels were excluded from the locations of the Eid prayer, in order to preserve the safety and comfort of worshipers.

On the other hand, the General Presidency for the Affairs of the Grand Mosque and the Prophet’s Mosque has raised its full readiness to receive pilgrims and worshipers on the night of sealing the Qur’an, through an integrated work system, through which the Presidency recruited 400 employees to receive the intended worshipers and pilgrims and direct them to the courtyard, the designated chapels, and the organization of entry and exit To and from the Grand Mosque, and identify the paths for people with special needs.

The Presidency worked to intensify the operations of purification, sterilization, operation, transportation and vehicles inside the Grand Mosque, opening the doors of the Grand Mosque, distributing packages of blessed Zamzam water to the chapels, the courtyard and the courtyards, and to visitors in general, and other services supervised by the Presidency, as well as strengthening the aspect of awareness and advice in directing visitors.