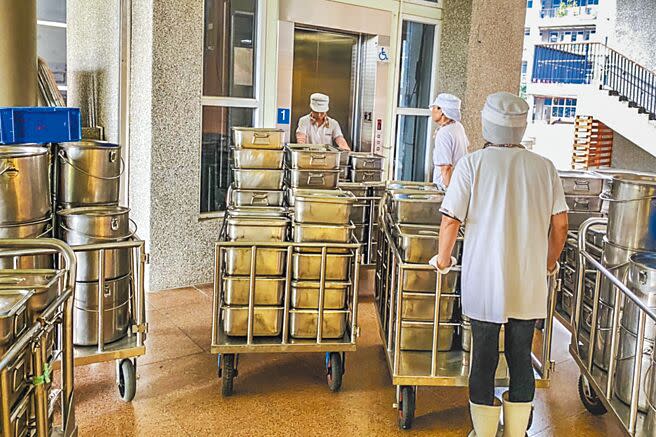 The local epidemic is spreading, and most of the schools below high school in Taiwan have changed to distance teaching this week, but it is difficult for group catering operators to prepare nutritious lunches. The industry said that since the outbreak of this wave of epidemics, the losses have been heavy. In April and May alone, the national food loss was as high as 100 million yuan. A large number of abandoned food materials had to be donated to social welfare organizations; the industry believed that the losses should not be absorbed by them, and the new The model of the nutritious lunch contract for the semester should be included in the meal suspension mechanism under the epidemic. The Ministry of Education said that the relevant relief measures still need to be jointly discussed by the Executive Yuan across ministries.

Chen Mingxin, chairman of the National Lunch Box Industry Association, said that since April, classes or the whole school have often been suspended due to the epidemic, and no meals will be provided. material subsidy measures, while other counties and cities have consulted with the employers and schools on their own.

Chen Mingxin said that since meals are prepared according to the menu, if the school announces a temporary suspension of classes in the afternoon or evening, the ingredients prepared by the group catering operators for the next day will be discarded. In the past two months, a large number of discarded ingredients were often donated to social welfare organizations. His company was responsible for nutritious lunches for schools in Taipei. In April, the turnover lost nearly 6 million yuan; in May, the epidemic broke out, and the turnover was as high as 13 million. It lost about 18 million in 2 months.

According to statistics, the annual turnover of nutritious lunch for senior high school and below in China is about 18 billion. Because the loss of ingredients in the first two days after the school is suspended is almost absorbed by the manufacturers. It is easier to dispatch to other places after the fourth, so in the past two months alone, the national food loss is as high as 100 million yuan.

The operators appeal that the net profit of the group catering industry is only 3 to 5%, and the profits are too low. The losses caused by the suspension of classes due to the epidemic should not be fully borne by the operators. The mechanism of meal suspension during the epidemic, including compensating for the loss of ingredients from manufacturers, also hopes that parents understand the troubles of manufacturers. A farmer surnamed Wang in the production and marketing class said that if the local epidemic continues like this, I am afraid that physical classes may be suspended until the end of the semester. Now the daily shipment of vegetables and fruits is less than half of the normal meal supply, so everyone has to find another way to sell, which is quite helpless.

The Ministry of Education stated that group catering operators can review the relevant provisions on the suspension of implementation of the lunch supply contract with the school and handle it accordingly, but the relief part still needs to be jointly discussed by the Executive Yuan cross-ministerial committee.

“If you can’t finish first or second, better third”