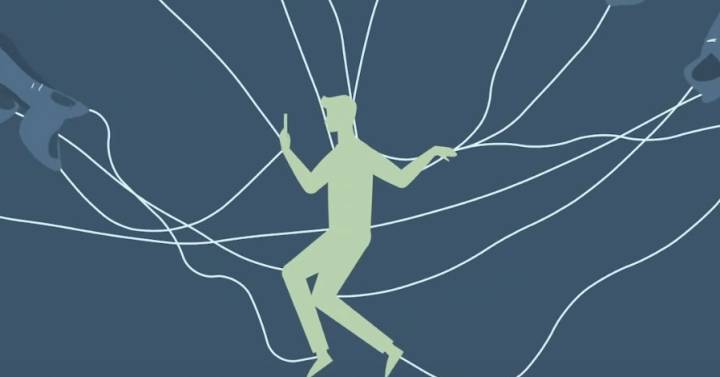 We have been fighting a wrong battle for some years. Driven by social media and audiovisual expansion, we have turned the discrepancy —political, social, economic— into a disproportionate frontism. The phenomenon, without being new in the generic field, is in the substantial. From the fronts of yesteryear that the ideological press reinforced, though not without difficulty, you could get out of it. Of the current ones, due to the segmentation of the audiences, less and less.

The documentary explains it The dilemma of networks (2020). Each user conforms with his choices to his own ideological-communicative sphere without being – and this is the key – aware of it. As you delve into the use of social media, your decisions are increasingly conditioned. Once segmented into their bubble, with constant stimuli from those who have a mental framework similar to theirs, it forms a community of comfort.

On the one hand, social networks project on the user the feeling that everything that happens around him is going at breakneck speed and therefore unsettle him. On the other hand, and as an antidote, they offer you a sense of security leading you to a virtual environment in which your own criteria are reinforced and which, to simplify, continuously gives you the reason. Doubts about his reflections, if any, disappear to give way to certainties.

Umberto Eco will express (The print, 2015) that “social media gives the right to speak to legions of idiots who first spoke only at the bar behind a glass of wine, without harming the community. Then they were quickly silenced and now they have the same right to speak as a Nobel laureate ”which, I add, probably has no profile on the net. The semiologist defined it as “the invasion of idiots,” but it’s worse. These idiots — any of us — not only have an opinion, but are accompanied by the noise of their bubbles, which at the same time increases their eagerness to continue pontificating.

Something similar happens in the audiovisual world. At the key moment of The loudest voice (2019), the series about the creator of the Fox News cable channel Roger Ailes (Russell Crowe) raises its directors that they should not direct television “to everyone”, but to a niche. “We have to program directly for the viewer who is willing to buy what we are trying to sell,” he says. “If we succeed, they will never change channels.” They will let many other channels compete for the progressive audience of one half of the United States while they are “the masters of the other half”.

No matter how familiar they are with American politics, they will know about the importance of networks and Fox in consolidating the trumpet phenomenon which, despite its defeat, is far from exhausted. As Kiko Llaneras reported on November 7 in this newspaper, 96% of Democratic voters and 89% of Republicans said they would be “scared” if they won the rival. Reflection of a phenomenon: citizens impervious to messages from the outside of their respective spheres. This, very evident in North America, also occurs in our country. More and more political parties have opted for the segmentation that networks and audiovisuals allow.

The goal is none other than to win by the minimum to implement the same program or influence a certain agenda with a minority. It is no longer a question of proposing a program for the bulk of society which is then validated with better or worse fortune by the voter, but directly renouncing a substantial part of it to consolidate a particular niche of voter. The change is substantial.

I said at the beginning that we are fighting a wrong battle. Every message that politics launches by proposing black and white options is pernicious to our democracy because it contributes to shielding and feeding the various ideological bubbles in a communicative environment from which it is not easy to escape. Avoiding the complexity, the values ​​of reason and criticism enlightened by which thousands of people fought and died for centuries and bet on the comfort of dogmas to defend our positions is a mistake. We need to embrace the difference and stop segmenting or we will be overwhelmed by those who hope to take advantage of our fears.

Joan Esculies he is a historian and writer.