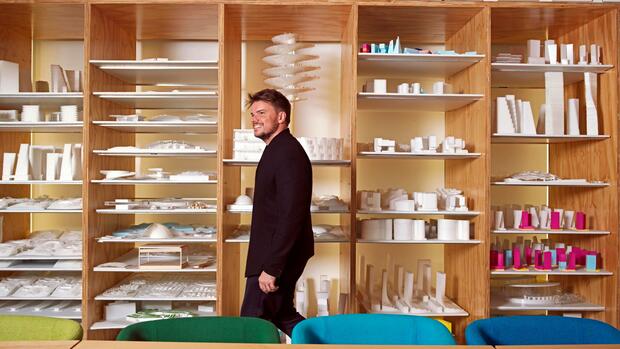 Frankfurt The Dane Bjarke Ingels is considered a rock star of his profession not only because of his spiky hairstyle and Scandinavian cool clothes. The 46-year-old has a reputation for being as visionary and unconventional as that Tesla– Chef Elon Musk – a comparison that the architect himself finds flattering. “I met him a couple of times,” says Ingels in an interview with the Handelsblatt. “He is impressive and one of the most moving people on this planet. I have a lot of respect for who he is and what he has achieved – not just because he is raising six children. I only have one son and I already have my hands full. “

Ingels is not only concerned with his two-year-old offspring for a long time: Around the world there are buildings that can hardly be overlooked, which the native Dane designed and which have already brought him many awards.

While critics envy his success and complain that his buildings do not integrate into their surroundings, but look like extravagant gimmicks by an overly confident architect, he is showered with praise and honors from other sources.

In addition to numerous architecture prizes, Ingels was placed on the list of the “100 Most Influential People in the World” by Time magazine in 2016, he spoke at the World Economic Forum in Davos, lectured at Harvard, Yale and Columbia University, and received a Golden Lion at the Architecture Biennale in Venice and even achieved what ennobles him today and what few living architects have to show: Not only was he the main character in a feature-length documentary by the Danish director Kaspar Astrup Schröder from 2017, Ingels was also the subject of one Documentation on Netflix.

“There aren’t many architects like him: so young, successful and visionary,” says the director of the German Architecture Museum in Frankfurt, Peter Cachola Schmal. Ingel’s designs have often caused quite a stir. “Bjarke Ingels works very conceptually with the context and works the geometry so skillfully that he often comes up with surprising results. We will hear a lot more from him. “

The Dane originally had other plans than becoming an architect: comic book artist was his dream job. Even as a child he was fascinated by the fact that he only needed a pen and a piece of paper to bring worlds to life, he says. Architecture was therefore almost a logical step: It enables him to carry this power into reality.
But in the end it was his father who advised him to study architecture first. After studying in Barcelona, ​​Ingels started at the Office for Metropolitan Architecture (OMA) of the star architect Rem Koolhaas in Rotterdam.

But he didn’t stay there long. Ingels moved back to his native Denmark. In 2005 he founded his own architectural office in Copenhagen, the name of which speaks volumes: It’s called BIG – for Bjarke Ingels Group.

Seen from the air, the two buildings form the letters V and M.

One of BIG’s first projects was a project in a new part of Copenhagen: the VM Houses. Two buildings that depict the letters V and M when viewed from the air.
Ingels had confidently convinced the building contractor with the argument that he would build “damn cheap”, as he said in the Netflix documentary. “And we hadn’t even built a dog house before,” admits Ingels himself.

The building complex contains 225 two-story apartments, which are based on over 80 different floor plans and, viewed in isolation, resemble the famous Tetris figures. From the outside, the complex looks prickly and at the same time filigree, from the inside it is light and open.

The unusual concept was well received. On the first day of sale, a Sunday, 110 apartments were sold, the building contractor reported. After that, the follow-up orders were not long in coming, they came mainly from Denmark: a facility with a boathouse, a psychiatric hospital, a hotel, and other residential buildings.

Ingels achieved his international breakthrough with the pyramid-shaped residential building VIA 57 West, his first building in New York: a property with 750 apartments in Manhattan that resembles a displaced pyramid, with a facade that rises steeply to 142 meters and overlooks the Hudson River.

VIA 57 West in Manhattan

Ingels received the International High-Rise Award in 2016 for the pyramid-shaped residential building.

Ingels received the International High-Rise Award for the project in 2016, although the jury publicly asked whether it was a high-rise – or just “a high-rise building”. But “this anti-skyscraper high-rise” was convincing with its “clarity of the concept” and because it “offered a quiet, protected oasis in the noisy big city without being closed to it”. Creating quiet zones close to nature in ever denser metropolises is one of the challenges in urban planning and therefore an increasingly common part of contemporary high-rise architecture, it said.

VIA 57 West did not remain the only project in the American city for long: Shortly afterwards, Ingels’ BIG office was awarded the contract to build a tower for the new World Trade Center.
In the meantime, the more than 500 architects who work for BIG in Copenhagen, New York, London and Barcelona cannot complain about a lack of work. There are projects going on around the world, and most of them are bursting with superlatives and innovations.

For NASA, a house is being developed from the 3D printer for the moon, and the US group’s new headquarters are in London Google and BIG has just won a building for the Hyperloop project.

The Dane completed his only project in Germany to date in Frankfurt last year: the Omniturm, one of the first mixed-use skyscrapers in Germany, which stands out from the Frankfurt cityscape with a kink in the central part of the tower.

But his favorite building is in Copenhagen, as Ingels puts it after some thought: Copenhill. A waste incineration plant that he converted into a kind of artificial mountain with a climbing wall and ski slope and which was opened to the public a year ago. As a waste incineration plant, Copenhill is part of a type of building that is normally not viewed as architecture, he explains.

The project reflects the power of architecture: you can give something “a shape that has not yet been given” and thus shape the future, “in the way we’d like it to be,” he says. That is “Formgiving”, the concept of shaping.

Ingels continues to make clear that he has the power to change the future with references to his son: “He doesn’t know that there was ever a time when you couldn’t ski on the roof of a power plant. For him and his entire generation, this is the world they grew up in. So we have the great opportunity to create and build the world we want to live in. “

His way of carelessly questioning traditions and leaving them behind is also reflected in his motto “Yes is more”, which he explained in a self-drawn comic: You shouldn’t allow yourself to be restricted, you shouldn’t force a strict aesthetic dogma on life.
“Yes is more” should make it clear that one is enriched by considering many ideas, concepts and influences. BIG works on projects that are like a small piece of a larger puzzle. You try to imagine what the future will look like, says Ingels. “Every building, every originality fits into this large artificial ecosystem that represents the world in which we live.”

more on the subject read exclusively in Handelsblatt Inside Real Estate, the specialist briefing on the future of the real estate industry. Register >> here.

Sustainability is an important factor here – but it should not be understood as a limitation: Sustainability must be designed in such a way that – just like with a Tesla – it leads to the best, most attractive option and is not just an alternative to the conventional.

Ingels likes to use the term “hedonistic sustainability” in this context: Sustainable architecture should not be viewed as a moral sacrifice, loss of quality of life or a political dilemma, but as a challenge and motivation to improve the quality of life of people and the community.

In 2020 Ingels will receive the honorary award of the German Sustainability Award as the world’s leading visionary of sustainable architecture – for Copenhill, among others. “The star architect shows the world how clean technology offers almost limitless possibilities, and proves that social responsibility and architectural playfulness are not mutually exclusive,” praised the jurors.

In Ingels’ work, his great interest in the full inclusion of society and in dealing with the challenges of our time is evident, which has earned him recognition far beyond the architecture scene. “His buildings are not only architecturally spectacular and create new opportunities for interaction, they also set new standards in terms of sustainability.”

In all of this, however, Ingels emphasizes the importance of fun – as part of the experience of his buildings as well as as a drive: “At the end of the day, you have to have fun with what you do. If you try to do things differently, it becomes very difficult to achieve the goal. You have to fight a lot of battles, win a lot of arguments. You have to convince a lot of people. And if you didn’t enjoy that, you wouldn’t have the energy to do all of that. “

There has never been a battle that Ingels did not face, the impression you get from the phone call for this article. But that’s not true. Ingels ran away once too: as an extra in the hit series “Game of Thrones”, in which he fled from a dragon.

More: Living in a modern “prefabricated building”: These are the five most beautiful high-rise buildings in the world