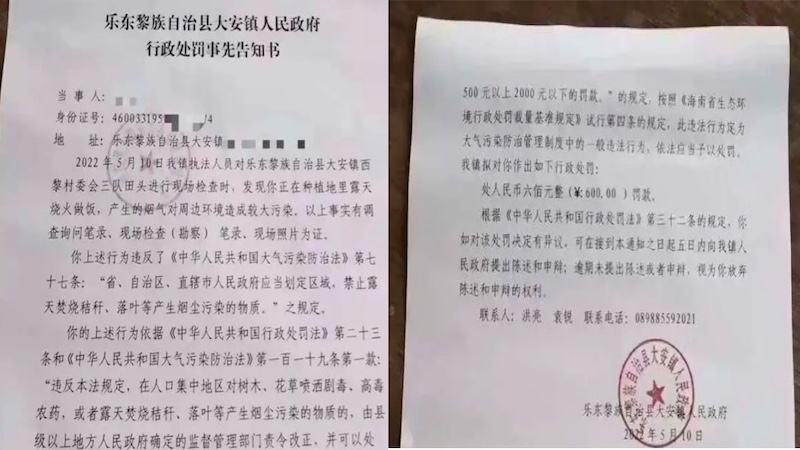 [NTDTV, Beijing time, May 13, 2022]A few days ago, there was a hot report on the mainland InternetAdministrative Penalty Advance Notice, referring to a farmer in Ledong Li Autonomous County, Hainan, who was fined 600 yuan (RMB, the same below) for cooking rice in the open air. The people said that this kind of punishment is absurd and a “big joke in the world.”

On May 12, it was reported on the Internet that Da’an Town, Ledongli Autonomous CountyAdministrative Penalty Advance NoticeIt shows that on the 10th, a local old man was cooking rice in the open air on the planting site, and was found by the town’s law enforcement officers. Law enforcement officers surveyed and took photos at the scene to collect evidence, and said that the smoke generated by the old man’s cooking caused great pollution to the surrounding environment.

The notice stated that the elderly violated Article 77 of the CCP’s Air Pollution Prevention and Control Law, and claimed that in accordance with the law and the Administrative Punishment Law, the elderly were fined 600 yuan.

The village party secretary of Xili Village disclosed that the village had installed cameras in the fields to monitor, and the smoke from the old man’s open fire and cooking in the fields was monitored.

The incident sparked heated discussions, and related incidents were all listed on Weibo and Baidu’s hot search lists.

Netizens pointed out, “This is a big joke in the world. I was fined 600 yuan for cooking rice in the open air. This is the first time I have heard of it. If this is done, then some outdoor activities such as camping can be cancelled, and everyone does not want it. After dinner, it’s just outrageous.”

Another netizen said: “In the countryside, firewood used to be used for cooking. Later, some farmers became richer and felt that it was too troublesome and tiring to go up the mountain to chop firewood, so they accepted natural gas for cooking. However, some farmers still use it because of family difficulties. Firewood is used for cooking, so it should not be forcibly prohibited from cooking with firewood.” “If you burn rice, it will pollute the air more? The ancestors have cooked like this for thousands of years, and the earth should have become a no-man’s land.”

“God, the earth, this is really a big joke. China has been cooking with firewood since ancient times, and I have never heard of being fined.” “To make a meal will pollute the environment, and those chemical factories are more harmful than this. Better.”

My Hero Academia: Illegals sets a date for the final chapter of the spin off manga